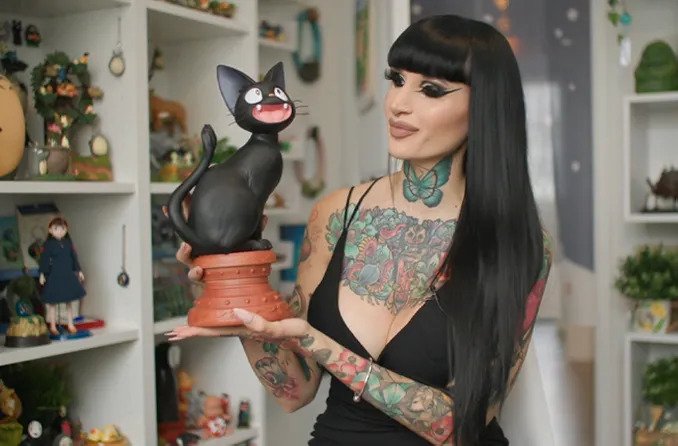 Studio Ghibli has released a ton of merchandise over the years, but only one fan has the biggest collection of Studio Ghibli merch in the world, and that’s Eloïse Von Velvet of France. She’s been officially put on the record books with Guinness World Records with her 1,496 Studio Ghibli objects.

She describes the incredible beauty of the Studio Ghibli cinematic universe. “Hayao Miyazaki has an extraordinary imagination and this makes his movies so unique,” she notes in the Guinness World Records video about her collection. The video switches back and forth between English and French, but an English translation is available in the subtitles.

She gives us a tour through her Studio Ghibli room, saying she had ten favorite items that stand out from the rest, sometimes for personal, sentimental reasons. She also notes it’s hard to whittle her list down to ten. Her collection includes statues, music boxes, plush toys, and even handcrafted items, among other things.

She saw Princess Mononoke for the first time when she was six, and fell in love. Then she found My Neighbor Totoro, and watched it just about every day for years.

A lot of her items have been obtained over the internet, and she’s bought them from around the world. She says she used to spend hours each day looking for them.

“I will never stop collecting, because it’s my passion, it’s my life,” she says. “My main goals in the years to come are to keep my Guinness World Records title, so I want my collection to be as big as possible.”

She loves being in the record books. “It’s like a dream come true,” she says. “You don’t just join Guinness World Records for popularity, you do it for what you love most in your life. And, yes, that’s Studio Ghibli.”

Yashahime: Princess Half-Demon and the Power of the Pearls
Man Steals from Schools to Get Taste of the World of Love Live!