The Vault of Error – Silent Möbius: The Motion Picture

I don’t know what strange stream of consciousness led me to think about the Streamline Pictures trailer reel with its oh-so-smooth narrator promising us the best in “state of the art Japanese animation,” but that thought triggered a cascade of memories, none more prevalent than an animated image of a young lady stepping out of her underwear.

The trailer was, after all, from the early Nineties. The distributors of what was then known under the somewhat pejorative term of “Japanimation” set out to prove that these weren’t your daddy’s cartoons by emphasizing all of the sex and violence contained therein. With perfect recall, I knew that the scene so advertised was from Silent Möbius: The Motion Picture, which was released on VHS double-billed with Neo-Tokyo.

But I could not for the life of me remember if I had ever seen it. 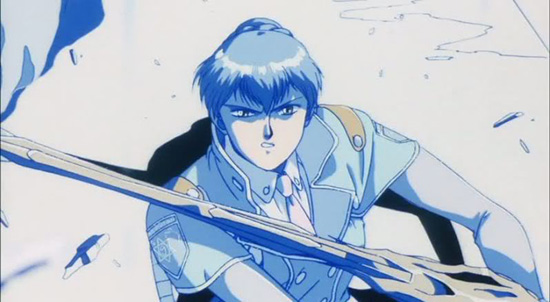 So I cracked open the Vault of Error and rummaged through the shelves, at first failing to find anything among the untouched copies of Shutendoji and Space Travelers. Initially I found nothing, like the Silent Möbius movie desired to be forgotten, but at last I came across Bandai Entertainment’s 2008 DVD rerelease, a license they rescued from the wreckage when Streamline Pictures and Orion imploded.

Now Bandai Entertainment is no more. And Silent Möbius has lain in wait for five years to ambush me with its rip-off Blade Runner aesthetic and its tentacle monsters and its gratuitous shower scene.

In the not-so-far-off year of 2028, Tokyo is a sprawling, high-tech metroplex complete with an Arthur C. Clarke-esque “elevator to the stars” known as Spiras, a structure which may or may not be responsible for attracting the attention of a horde of extra-dimensional hell-beasts known as the Lucifer Hawk. To protect the public from this otherworldly threat, the all-female task force of AMP, the Attacked Mystification Police, is on the case. Based off of the manga by Kia “I Draw All Women with the Same Face” Asamiya, Silent Möbius: The Motion Picture serves as a sort of origin story for Katsumi Liqueur, a young lady who staves off the Lucifer Hawk with the help of her incredible magical powers and the aid of Grospoliner, an extra-dimensional being that takes the shape of an enormous honking sword. Other cast members include Kiddy, a combat cyborg with a hilarious future pistol, and Nami, a demure Shinto priestess, but Katsumi gets the lion’s share of the screen time. 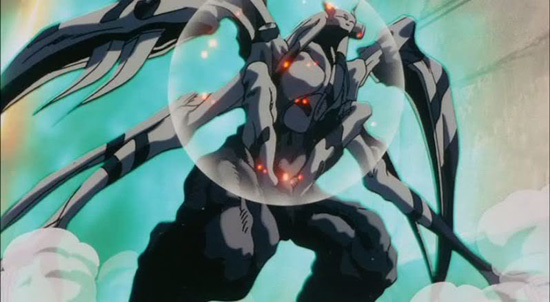 Told mostly in flashback, Silent Möbius suffers from the usual comic book movie adaptation difficulties that arise when you attempt to condense a character’s entire backstory from multiple manga volumes into a fifty-four minute runtime. Although in the present day of Silent Möbius, Katsumi is a strong, tough, and capable heroine, her nineteen-year-old self (with whom we spend most of the movie) is a bit of a crybaby and a skeptic. Granted, I would get a tad emotional, too, if I were constantly being attacked by hideous tentacle-demons from the planet Nemesis, but the end result is that Katsumi spends too much time as a weak, passive, reactionary character. That’s no way to treat a protagonist.

Silent Möbius isn’t a bad film. It’s got solid production design and good animation, although the scenes involving the Lucifer Hawk that attacks while Katsumi showers are a tad too fetishistic for my tastes. The background paintings of Tokyo’s futuristic cityscapes are exquisite, although I admit I am biased by my love for all things that consciously emulate the look of Blade Runner. Moreover, this film treats its fundamentally absurd mash-up of hyper-tech science fiction and mystical fantasy with a level of gravity that’s undeniably endearing. Silent Möbius tries so hard. Even when I realized one climactic scene was cribbing from The Wizard of Oz, I ended up smiling rather than rolling my eyes. 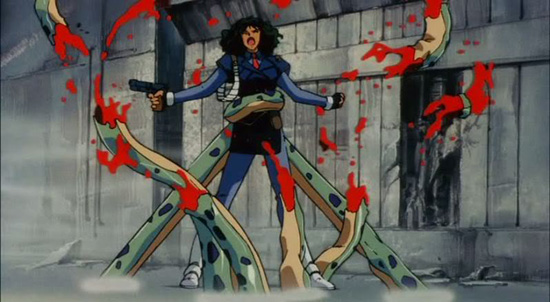 Like the television series that followed it in the late Nineties, Silent Möbius is average but forgettable. I can’t comment on the sequel movie, which remains on my shelf, unopened, although I get the impression that Silent Möbius, though it takes great glee in blowing stuff up, was never meant to set the world on fire.