Moving is Hell. As I write this all of my worldly possessions (including the entire Vault of Error) are neatly packed into twenty-three 68 liter plastic storage bins of various colors ranging from a manly gunmetal gray to an even manlier radioactive fuchsia. So consider yourselves lucky, gentle readers, that I braved this mountain of questionable purchases and plucked forth—at random—something worth writing about. How serendipitous that this selection turned out to be Detonator Orgun, a turgid, overblown mecha OVA from the early Nineties that just so happens to deal thematically with the exact sort of crises that currently define my life.

Like myself, the hero of Detonator Orgun, Tomoru, is uncertain about the future. Like myself, Tomoru views the past through rose-tinted glasses, looking back with misplaced nostalgia on artifacts from a bygone era. (In Tomoru’s case, it’s planes and rockets and other weapons of war; in my case, it’s the anime I watched with my friends in high school, anime such as Detonator Orgun.) Like myself, Tomoru has unfortunate taste in hairstyles, although even at my shaggiest I never sported the monstrous mullet / ponytail hybrid that our hero rocks over the course of these three OVAs. And like myself, Tomoru has to merge with a powerful alien suit of cyber-armor and fight climactic laser battles in space to defend the Earth from a technologically superior foe.

Okay, I might have made that last one up. 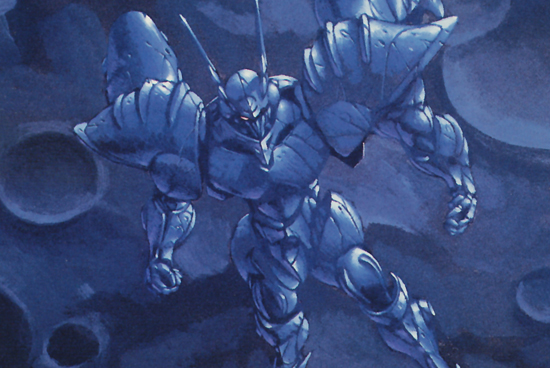 In all seriousness, Tekkaman Blade—er, I mean Detonator Orgun—is an anime with a very familiar premise: an unstoppable alien force threatens the Earth. A mighty hero from that unstoppable alien force grows weary of a lifetime of nonstop bloodshed, develops a conscience, and then defects to the side of the Earthlings in order to help them protect the things they love. Tremendous space battles ensue, and in the end hope and love and humanity triumph over the evil bad alien menace and everyone turns stoically toward the sunset and murmurs some squishy platitude about looking towards a brighter future, we must never forget, now our real battle begins, blah blah blah, etc. etc.

What makes Detonator Orgun Vault-worthy? It’s not the plot, which is boilerplate. It’s not the characters, which are generic. It’s not the mechanical designs, which are competent but not likely to light the fires of any but the most technologically inclined otaku. It’s certainly not the direction by Masami Obari. Obari is a gifted and prolific animator with decades of experience in the medium, but he demonstrates questionable taste when he lands in the director’s chair. Voltage Fighter Gowcaiser, anyone? Voogie’s Angel? Gravion? Anyone? Anyone? No?

No, Detonator Orgun makes the list because it starts off dull, proceeds to take an interesting twist and mangle it beyond recognition, and concludes in a manner that can only be described as complete and utter nonsense, even by anime standards. 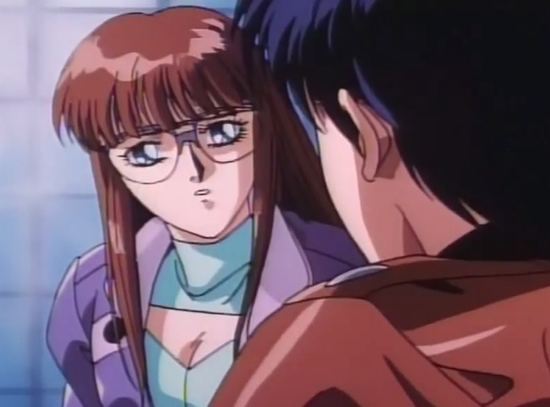 I’m not kidding. The first episode of Detonator Orgun nearly murdered me. I don’t break out the ‘B’ word lightly, but it was soooooooo booooooooooring. Quiet, introspective character moments are not Masami Obari’s forte. We don’t need to spend fifty-five minutes recounting an origin story for Tomoru and Orgun, especially when the same origin story can be told in fifteen minutes or even five. Here’s everything of consequence that happens in the first OVA: Tomoru is a disaffected youth living in a high-tech future arcology. He’s uncertain about whether he should follow in the footsteps of his father and elder brother, and he’s dissatisfied with the prospect of a career in intra-stellar shipping. He falls for a pretty lady he observes on the future-train, who turns out to be Professor Kanzaki, a genetically engineered super-genius in charge of the research arm of the Earth Defense Force. (Yes, the good guys in Detonator Orgun work for the EDF. No, they do not shoot giant ants with bazookas. More’s the pity.) Tomoru’s recurring nightmares turn out to be a psychic link with Orgun, the aforementioned defecting alien super-soldier who crash-lands on the Moon. Tomoru and Orgun join forces to protect the Earth. The bad guys, a race of cybernetic aliens called the Evoluder, are on their way to blow up our peaceful blue orb with their Battle Planet Zohma, which contains a giant honking antimatter cannon. Also, there’s a blind psychic girl named Kumi Jefferson who predicts the end of the world. Roll credits. 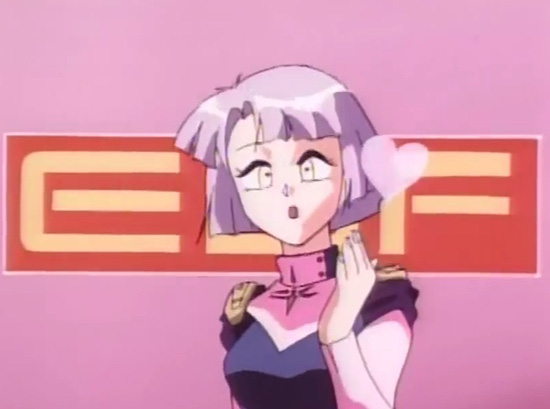 Episode Two introduces Orgun’s would-be girlfriend, Leave, a pink robot lady who develops a conscience of her own, and the villainous rival, Lang, appropriately voiced by Norio Wakamoto. Manly emotions seethe as Lang and Orgun clash. Lang scolds Orgun for betraying the Evoluder and defying his destiny. Pink Robot Lady sacrifices herself to save Orgun, Tomoru overcomes his crisis of confidence and finds something worth fighting for—hint: it’s a pretty professor lady in Coke bottle glasses—and Professor Kanzaki discovers the terrible secret of the Evoluder race.

Are you ready for this?

Oh, cruel and agonizing twist of Fate! The Evoluder are the descendants of a manned space mission to the Cygnus galaxy, a mission that disappeared after encountering a super-gravitational anomaly some two hundred years ago. While only two centuries have passed on Earth, thanks to the wibbly-wobbly nature of time dilation two hundred and seventy million years have passed for the beings that evolve into the Evoluder. In order to survive, the Evoluder forsook their humanity and merged with machines, and eventually they became a pitiless army of intergalactic conquerors. Now they unknowingly threaten their ancestral home. This is a cool twist, but it’s handled in a ham-handed manner. And of course it’s hinted that Zoa, the commander of the Evoluder forces, is secretly manipulating Lady Mhiku, the Evoluder queen, for his own nefarious ends. 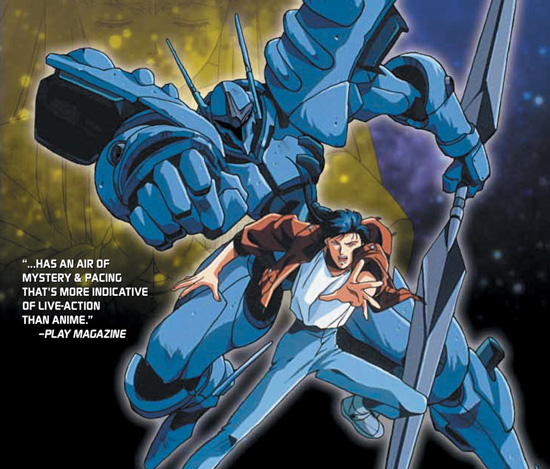 Episode Three is the kicker.

The EDF manages to retro-engineer Orgun’s Solid Armor suit technology and mount a feeble defense against the bad guys, but ultimately, it all comes down to Orgun. As the clock ticks down and the antimatter cannon prepares to zap Earth into a cloud of superheated vapor, only Orgun’s Grand Cruciform configuration can save the day. But, alas, Orgun is fighting in orbit on the dark side of the Earth, and the Grand Cruciform attack is solar-powered. All hope is lost!

Then Kumi, the blind psychic girl from earlier, focuses all of her telekinetic power. In an effort to help Orgun launch his attack and save the Earth, she moves the sun.

Let that sink in for a moment.

I don’t have enough exclamations points to describe how ridiculous that is. 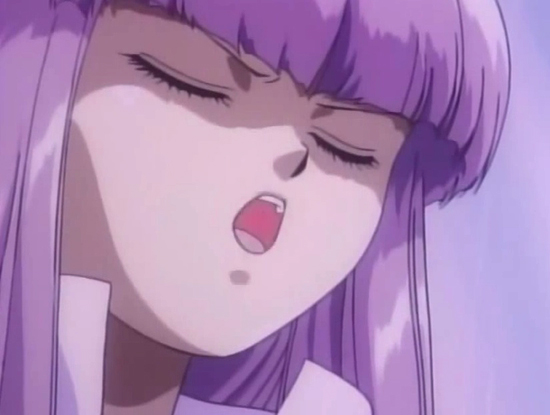 No, this doesn’t cause a catastrophic gravitational shift that sends the Earth hurtling into the void like an errant ping-pong ball. It doesn’t collapse the entire Solar system. It’s cool, guys. Just roll with it.

Orgun powers up and blasts the bad guys. The Evoluder regain their human compassion and depart in peace. Tomoru and Orgun re-enter the Earth’s atmosphere, trailing flames as they scorch through the sky like a meteorite. Tomoru and Professor Kanzaki share a romantic embrace on the beach. Meanwhile poor Orgun lays facedown in the surf, no doubt while hermit crabs and minnows nibble at the organic portions of his cybernetic brain. As a final indignity, this noble cyborg hero spends the rest of his days as part of a museum display, forever striking a goofy sentai hero pose. I like to think that Orgun is still conscious and cursing the day that he ever decided to help humanity. The end. I just saved you over two hours of stultifying boredom punctuated like a starlit sky with pinpricks of awesomeness.

Honestly, I can’t fault Detonator Orgun for feeling cobbled together. The whole time watching it, my brain drew parallels to other, more interesting projects that the creators of Orgun worked on. It’s no surprise that the themes explored in Detonator Orgun—trans-humanism, the loneliness of space, the cyclical nature of history, and the sense of futility experienced by cultures consumed by war—are so similar to those explored in Gall Force, because Hideki Kakinuma is responsible for writing both. But whereas Gall Force felt like a sincere work of popular science fiction, Orgun feels like Kakinuma repeating himself, chewing over an idea he’s already examined more thoroughly and with greater skill. As for future utopias and transformation as a metaphor for self-actualization, I’ve seen this kind of imagery from Masami Obari before and since. Heck, it even crops up in his adults-only animation, leading me to suspect there’s a greater Obari-verse that he’s constructing where the protagonists from Detonator Orgun could rub elbows (or other body parts) with the cast of Angel Blade. And for the love of everything holy, don’t Google that last title with your Safe Settings turned off. 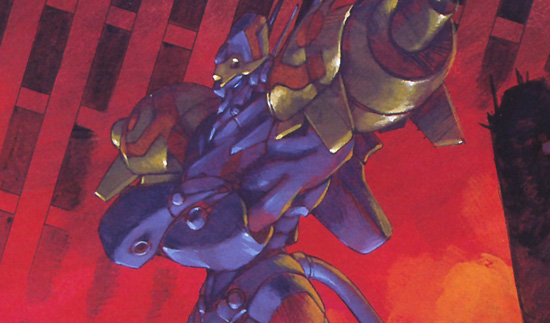 Time moves ever onward. Like the lonely Evoluder and their battle fleet, I prepare to leave my home behind, possibly losing something priceless in the process. The future—like space—is a dark, cold, indifferent place, and we all travel through it individually, our destination unknown. Surely, the Evoluder will find new worlds to conquer, and I will find new memories to trap within my Vault, new relics of former glories, if Detonator Orgun can be described as such. I hold Orgun close to my heart because it was a personal favorite of a late, lamented friend. But he is gone, and I am not the person I once was. I don’t see the world through the same lenses. I look at a thirteen-year-old DVD of a twenty-three-year-old Japanese animation, and I don’t see the maudlin frolics of robots punching each other in space. I see a mediocre Telecine transfer with noticeable rainbow artifacting. My brain reels at the 4:3 aspect ratio, confused and disturbed by the way things used to be. I write words I barely recognize, equal parts snob and videophile.

Curse you, Detonator Orgun. What have you done to me? 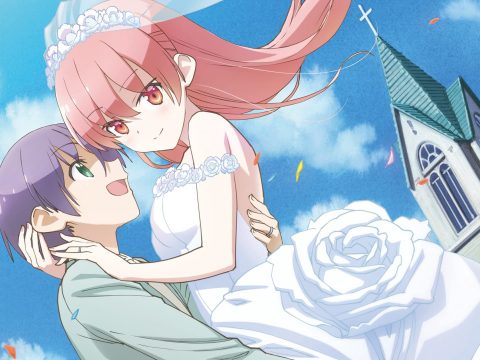