The Third: The Girl With the Blue Eye 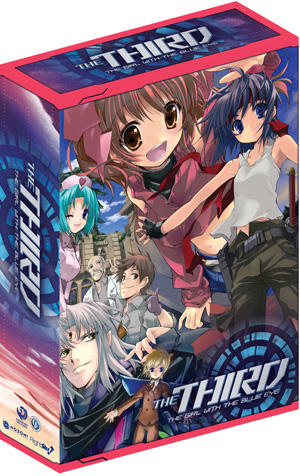 In Eastern spirituality, the third eye is a gateway to higher consciousness and the pinpoint of the sixth chakra. In The Third: The Girl With the Blue Eye, it’s all that and more.

After the world is devastated by war, humankind finds itself ruled by a new and single government. The beings of this government are able to wield mysterious magical power, and, though hated by their subjects, they nevertheless keep a firm grip over the earth. Glowing third eyes on their foreheads mark them as the authorities.

Seventeen-year-old Honoka, a girl with the soul of a poet and the strength of a warrior, is one of the people living in this world. Nicknamed the Sword Dancer because of her combat techniques and admired for her independence and cleverness, she’s an ideal heroine. In fact, she’s the kind of heroine I’d like to see more often in anime. A fair amount of anime heroines are drawn with a certain degree of sex appeal, and while there’s a place for that, it’s nice to see other examples, too. Here we have a heroine whose actions count and it doesn’t concentrate so much on her exaggerated body. (In part because she doesn’t have an exaggerated body. Well, except for those big anime eyes.)

One night she saves the life of a man who has the power to heal and who believes Honoka is more than she appears. (And of course she is, because where would the story be without that part of the plot?) What he is and where he’s from is a mystery to unravel, along with the past of the third-eyed race. And though Honoka may rebel against her leaders whenever she gets the chance, she holds an unspeakable link to them.

The animation in The Third is really quite impressive. It’s lush and gleaming, with starry skies and towering landscapes looking as if they could be real. Its music is lovely, and everything about it has a nice feel. It has all the right components: tight storylines, intriguing characters, action and comedy.  All in all, this is a good anime (and did I mention how much I like the heroine?). It’s a sci-fi series, a genre I tend not to get into, but this time the characters and plot carried it for me and kept my interest. Like the East’s third eye, this series looks simple at first glance and then gives back something deep and meaningful.

This isn’t a brand new title from Right Stuf, but a re-release that contains all twenty-four episodes in a thinpak edition. And while lately Right Stuf has been releasing sub-only anime, The Third was made with a dub, which is always a bonus for many of us out there.