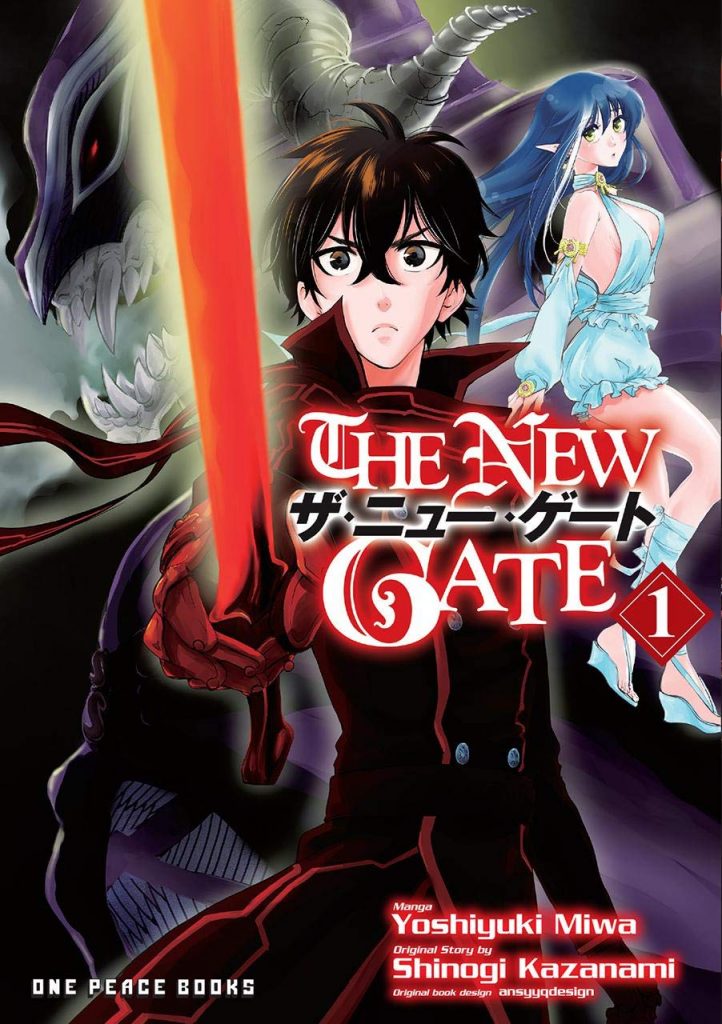 20-year-old Shin loves playing video games. The New Gate opens with him appearing as if inside the game itself, fighting a boss. The marvels of virtual reality! He defeats the boss, wins the game, and gets ready to log out with his fellow gamers. But while he can see the others log out, he discovers he no longer has that option. He really is in the video game.

He tries to figure out what’s going on and goes exploring. Before long he meets game characters, including the pretty elf Tiera. Tiera tells him that 500 years ago many people just vanished from their world. Shin realizes these people must be his fellow gamers who logged off, and that he’s somehow been transported to the future.

She also tells him that she’s been cursed, and her black hair signifies it. Shin lifts the curse through a purify technique in the game, not thinking too much of it. But it turns out very few people in the game have this skill, making Shin remarkable to the others.

Throughout the rest of the first volume, Shin gradually meets a cast of interesting characters. They include elves, beastgirls and some humans. This is one of those games with a very strong medieval European fantasy vibe, though with some Japanese twists, like Shin’s katana. Shin also begins researching what happened to this land, though of course it’s too early to reveal very much yet. This is one of those manga where the first volume basically sets everything up so the story can move forward after this. As it is now, it feels like a good fit for readers who enjoy shonen comics and video games, especially MMORPGs, and especially if you like the medieval fantasy angle.

And of course there’s fighting, because this is a video game. Periodically Shin has to show his fighting skills to defeat a fighter or monster. Still, there’s more about characters than fighting.

The New Gate started as a web novel series by Shinogi Kazanami before it received this manga adaptation. Interestingly, publisher One Peace Books put http://Shinogi Kazanamiout an interview with Kazanami for the English release, where he talks more about himself and his books, and vows there’s a lot more to come for Shin. Sounds promising for where the story can go from here!