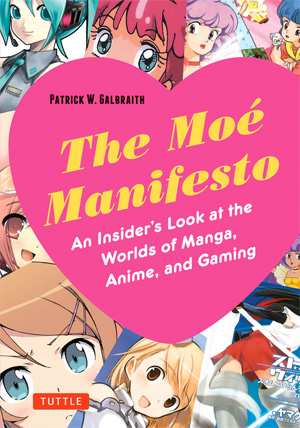 Patrick Galbraith, author of several books about anime and the people who love it, including The Otaku Encyclopedia and Otaku Spaces, is out with a new book called The Moe Manifesto, an in-depth look at just what this whole moe thing is all about.

In a wide-ranging interview, we spoke to Galbraith why he decided to write the book, how he went about it, and what the heck moe really means.

OUSA: What is the book about?

Galbraith: It’s about moe, or affection for and attachment to fictional characters, which is something that I’ve been interested in for a while now. During my research for The Otaku Encyclopedia, around 2007 and 2008, I was doing interviews with a bunch of people, asking them about various aspects of otaku culture in Japan.

One thing that a lot of people mentioned to me was this thing called “moe.” Everyone had an opinion. For some, it was a phenomenon to celebrate, while for others it was a disease. I left like there was a lot more there that could be explored, but it couldn’t be included in The Otaku Encyclopedia. So, I started working on another book, which became The Moe Manifesto.

This book has a somewhat unorthodox structure. What I tried to do was interview people who had something to say about moe. People with a strong opinion, be it celebratory or critical. It is really an awesome lineup, with everyone from Eiji Otsuka to Toru Honda to Hiroki Azuma to Noizi Ito to Tamaki Saito to Jun Maeda weighing in on the topic. There is an introduction to the book where I synthesize points from the interviews and my own research on moe, but I am just one voice among many. The interviewees are the experts, and I am not talking around or above them. Each is in the book to say something, to contribute to the conversation. These are people who know so much, but their voices are often not heard outside of Japan.

The book is kind of organized historically – 19 interviews, which cover fandom in Japan from the 70s to the present. Some people talk about specific historical moments, while others launch into more abstract discussions. Again, it’s a bit unorthodox to do book of interviews on moe, but these voices are an important part of the history of otaku culture in Japan. 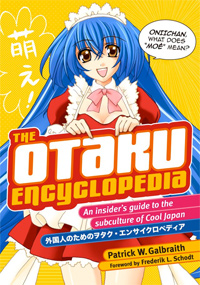 The Moe Manifesto is not just text, of course. It’s a very visual book, like The Otaku Encyclopedia. The images are there to tie in with specific points made by the interviewees, the characters and works under discussion by or associated with the interviewee, so you’ll see familiar images, but in a new light. You get to see a kind of alternative history that shows just how deep moe runs and how it’s become something that can’t be ignored. The book doesn’t try to reject moe, or accept it, but rather to give a range of expert opinions on the topic, many of which have not been seen in English before now.

After people read the interviews, hopefully they can have a deeper discussion about moe. To be honest, one of my motivations to write this book was frustration with people saying, on the one hand, “moe sucks” or “it’s the death of anime,” and on the other, “it’s the greatest time in history to be an anime fan” and that kind of thing. I hope that we can take things a little deeper with a sustained and serious discussion. The discourse on moe is so advanced in Japan, and I wanted to expose people to some of the complexities that have emerged out of it.

The Moe Manifesto is about approaching things differently. If we ask different questions and look at familiar things in different ways, guided by experts, how might the discussion change?

Why is the book called The Moe Manifesto?

Yes, it’s a bit of a weird title! (laughs) I wanted to have a title that would capture the energy of the people I encountered during my research. For example, there was this group called the Revolutionary Moe-ists Alliance (kakumei-teki moe shugisha dōmei), and they were, you know, they were political. They were against the hegemony of gender performance, for example, the idea of being a cool guy who gets the girl and goes on dates in fashionable places. They’d gather on the street and protest Valentine’s Day, and they’d organize events where they could talk about their favorite characters and things like that.

For them, moe it really was a manifesto. Affection for fictional characters was a something to be stated, shared, something political. I remember these guys passing out fliers in Akihabara. Half of them were dressed like Haruhi Suzumiya – many of them guys, by the way – and the other half were dressed up in the helmet, dark glasses and face towel that marks the student radical in Japan. They were just sort of playing around, but also saying these radical things. Like, no censorship of manga, regardless of content, or no to the three-dimensional, so-called “real” world. 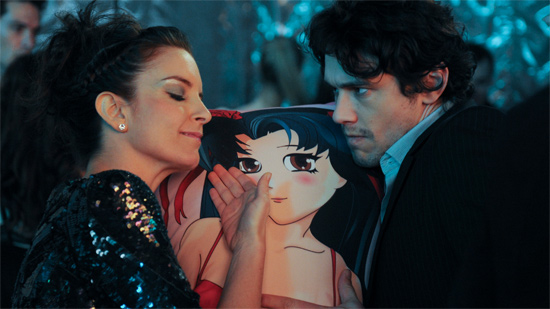 People are out there taking a stance, for or against moe. People like Toru Honda, Hikaru Higashimura and Mitsuru Soda. People who say loving fictional characters saved their lives, or showed them a new way to live. So in that sense the book’s not a single manifesto, it’s kind of a collection of manifestos. Readers can position themselves with and against these people. But that all starts from first hearing them out, and for that they need a space to voice their opinions and to have them taken seriously. That’s The Moe Manifesto.

So, in a sense, the book manifests some of the discussion about moe floating out there in the ether. You can actually see in front of you, on the page, how people talk about moe and what characters they associate with it.

I rewrote the introduction a million times (laughs), but I eventually decided to start off with the moe episode of 30 Rock that guest stars James Franco. Because, you know, that’s the ultimate joke. It’s like, “look at my hug pillow with an anime girl on it! This is moe, where people actually have feelings for fictional characters! Those crazy Japanese!” We’ve seen this in the news so many times. It’s easy to say, “those guys are weird,” or “that country is weird,” or “that way of expressing yourself is weird.” This is not a joke for many people. It is not something to be laughed at and forgotten. We need to get beyond that initial dismissive phase.

How did you choose the interviewees?

I mostly identified them through research. They are the people writing about otaku culture in Japan, who are involved in it and who have something to say about moe. Some of the interviewees came from my ongoing research on otaku, so overlapping with The Otaku Encyclopedia. With Eiji Otsuka, for example, I’d been courting him for a long time, and when I finally got to him, it was past the deadline for the encyclopedia. Anyway, during the interview, I wanted to know more about Manga Burikko, the magazine he edited, which is where the term otaku was first used as a slur against manga and anime fans. So, Otsuka basically told me that the magazine contributed to what we now call moe. OK, I thought, cool. And so I asked him to explain more about moe. And he got really angry! He said, “Moe doesn’t exist. It’s like Fujiyama, geisha, samurai, sushi – it’s just this western Orientalist fantasy of Japan.” My confusion at the two sides of his story sparked more research. 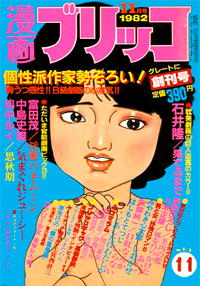 From there, it was kind of like investigative journalism. Someone would mention someone else, or I’d find someone’s name while doing research or attending a lecture. Many of those involved in the study of otaku culture in Japan don’t like one another very much. They’ve often burned bridges – Eiji Otsuka, Hiroki Azuma and Tamaki Saito, for example – but were willing to sit with me for an interview because The Moe Manifesto is in English. So, in a way, getting all of them together into one book is something of a miracle.

It’s funny, when you ask, “What is moe?” almost every interviewee gives a different answer. Sometimes entirely different. Is there one you ended up particularly agreeing with?

There was one that caught me by surprise. Jun Maeda, the storywriter for Visual Arts (Key), said something to the effect of, “Moe is a reason to live.” I was like, “Whoa, drama bomb!” (laughs) But he meant it, and his definition comes out of his own personal and professional experience.

Anyway, you are right that there are a lot of ways to define moe, but I think the baseline was provided by Kaichiro Morikawa, who wrote a book about Akihabara, moe and otaku. I think his definition is pretty even-handed. For Morikawa, moe is “a response to a fictional character.” The response can be bodily or mental, sexual or emotional, but basically a response, often experienced as movement of the heart, a tug on the heartstrings, love at first sight, mune kyun.

The important part of Morikawa’s definition is that this response is to a fictional character. As it turns out, this is an extremely important aspect of moe – and is related to the original discussion of otaku in Manga Burikko in 1983.

Stay tuned for part two of the interview, in which Galbraith explains one of the most heated arguments in otaku history and discusses the Tokyo government’s recent crackdown on manga it regards as unhealthy.