The Engagement of Marielle Clarac Is All About Fangirling 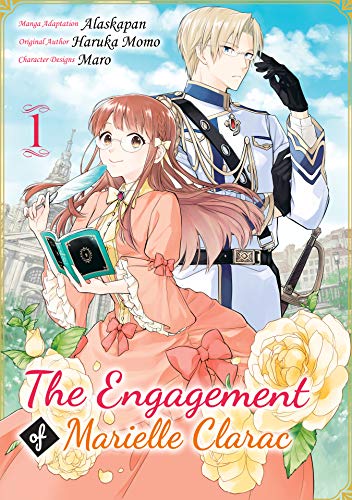 The Engagement of Marielle Clarac is a manga adaptation of a light novel of the same name that is also published by J-Novel Club. It follows Marielle, an 18-year-old who’s usually ignored in the background but who is actually very precocious, fun and likable. She likes to write romance novels, and it seems as if she’s starting to live in one when Simeon, second-in-command of the Royal Order of Knights, asks her to marry him.

She eagerly agrees, and she fangirls over him. Yes, this is a self-aware manga that, while taking place in a historical fantasy European-style place, has modern things like photographs and fangirling. The fangirling isn’t annoying, the way it sometimes can be, but quite funny and fitting for the story. Marielle wants to use what happens to her in life in her romance novels, so even when things go terribly wrong, she’s excited because it’s fodder for her books. Because of this, very little upsets her, even when she’s bullied by women jealous that she got Simeon and they didn’t.

But she’s supposed to keep her romance books a secret from Simeon, for fear he wouldn’t approve. Except it turns out he’s already been reading them on his own, and Marielle thinks he might have caught on that she’s the girl behind the pen name. Is she going to tell him the truth, even if it means the end of their relationship? Then again, how could she keep this part of herself secret from the man who’s going to be her husband?

Marielle is the optimistic, upbeat character, while Simeon is calmer, less flighty and very serious. He has a sense of honor about him that makes him an appealing character. The artwork adapts the story well, and shows both Simeon’s handsomeness and Marielle’s comedic timing (her expressions can be priceless). The first volume ends with a tease of what’s to come, as well as an extra chapter that’s written in prose instead of being in comic book form. A fun and light read for fans of shojo light novels and manga.

The Engagement of Marielle Clarac 1