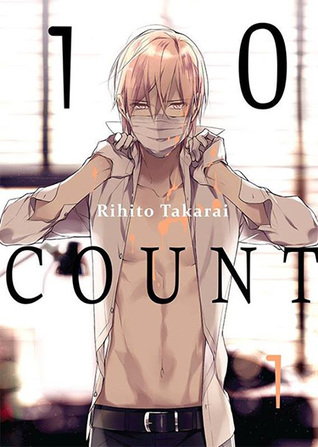 Shirotani’s boss is almost killed by a driver not paying attention to the road, and Shirotani is racked with guilt for not pushing his boss out of the way in time. However, a young man riding a bike does swoop in and save the boss, so that he gets a hurt knee instead of a lost life. At the hospital afterward, the cyclist notes Shirotani’s gloves, and correctly suggests that Shirotani suffers from obsessive compulsive disorder and that he washes his hands to the point of bleeding. It was Shirotani’s hatred of touching anything that might be germy that kept him from pushing his boss to safety.

The cyclist, Kurose, also happens to be a therapist, and offers to help Shirotani overcome his germophobia and OCD. Kurose is even willing to do this for free, and makes a remark about just wanting Shirotani to be his friend. It’s an unusual situation, but Shirotani wants to work with him.

As a starting point, Kurose has Shirotani make a list of ten things he’d be phobic about doing, such as touching a door handle with no gloves on, or buying a book from the bookstore (because of the germs of other people touching it). Shirotani comes up with nine things, and Kurose says that when he comes up with a tenth thing, Kurose will explain why he wants to help Shirotani out. Beyond that, Kurose begins to help Shirotani go through the list and face his fears.

In a world where there are plenty of yaoi manga where they-love-each-other-because-they-do, it’s always nice to see heartfelt, personable characters get to know each other and fall in love. Shirotani soon starts having feelings for Kurose, but he can’t tell if those feelings are mutual. He does feel very vulnerable with Kurose, yet at the same time Kurose’s help is making Shirotani stronger. There are a few flashbacks that seem to hint that something terrible happened in Shirotani’s past that will explain his phobias, but nothing is answered yet.

The first volume of this series moves in a languid, relaxed pace, which works well with its sweet-natured and melancholic storytelling style. While it has a “Mature” rating, there’s nothing in this volume that would warrant that, implying that later on the series gets more explicit. It stops with an emotional cliffhanger that works very effectively, especially after about 200 pages of getting to know the characters. This is the kind of manga where you get involved with the characters and want to know what will happen to them and how things will work out.