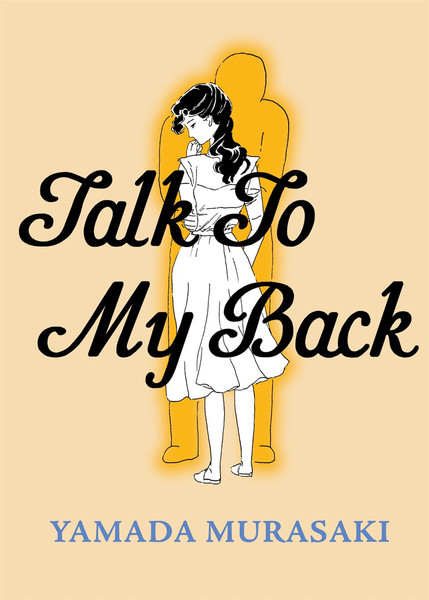 Talk to My Back is a sparsely illustrated and unsentimental look at married life. Originally published in Japan in the early 80s, it’s finally getting an English release.

Talk to My Back was serialized in Garo, an influential alternative comics manga magazine, and one that didn’t publish a lot of women. So the fact they published work by Yamada Murasaki, a female mangaka, stands out. The manga also stands out for the fact that while traditionally a lot of manga written by women for women shows marriage and childcare in a romantic light, this shows it more like it really is. It doesn’t sugarcoat marriage and childcare, but it doesn’t make it all look bad, either. It shows nuances.

The manga consists of slice-of-life chapters with a few themes running through. The main character, Chiharu, is a stay-at-home mother of two, with a husband who’s absent throughout much of the book. When he is around, he’s usually not helpful, and Chiharu suspects him of cheating on her.

While the husband is the least developed character, her two daughters gradually grow over the pages. Chiharu sometimes feels stifled by her children and how they hang on to her. She also loves them and cares for them. When they go to bed at night, she is lonely. When she has the opportunity to be away from family, she has all sorts of emotions. She gets a part-time job, much to the chagrin of her husband, and she yearns for a freedom she doesn’t have.

The artwork is sketchy and light, and the stories feel quiet, even when they have explosive elements, like Chiharu wanting her freedom. This style makes it successfully feel like day-to-day life, moving from one thing to the next.

The manga includes a lengthy afterword written by Ryan Holmberg, who also translated Talk to My Back. The afterword goes into detail on creator Murasaki’s life, giving more appreciation for her work and what she had to fight against to keep going. A very honest and important contribution to women’s comics.

talk to my back 1