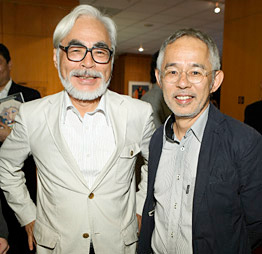 That became even clearer this week with the news that Toshio Suzuki, producer, former president and third co-founder of Studio Ghibli, would be stepping down from his producing position. Suzuki will be taking a less-active role as “general manager.”

Though less known in the States than his fellow co-founders, Suzuki has been an integral part of Ghibli since its founding. Miyazaki is quoted as saying, “if it were not for Suzuki, there wouldn’t have been Studio Ghibli.” In Japan, Suzuki appears at press events and hosts as radio program, making him “the face of Ghibli.”

Suzuki began his professional career at publisher Tokuma Shoten, becoming editor-in-chief of Animage, where Miyazaki’s Nausicaa manga was being serialized. He was part of the production committee on the Nausicaa film and helped found Ghibli in 1985, moving there full-time in 1989.

Production duty at Studio Ghibli now falls to Yoshiaki Nishimura, who worked on the production side of Howl’s Moving Castle and Tales from Earthsea.

With both a film, Marnie Was There, and Goro Miyazaki’s TV show, Ronia the Robber’s Daughter, appearing this year, 2014 will truly be a test of whether Ghibli can prosper under a new generation of leadership.