So, I Can’t Play H Puts a Supernatural Spin on Fanservice 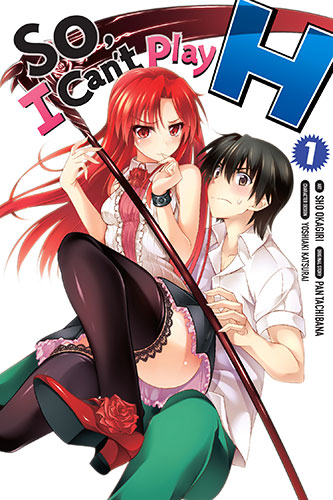 Ryosuke meets a fragile looking girl who’s getting soaked in the rain. He offers her his umbrella, wanting to help, talking to himself about how he views women as treasures. What he doesn’t know is that she’s a dangerous Grim Reaper who’s visiting the human dimension, and he’s putting his life in danger by offering his assistance to whatever she may need.

Indeed, she stabs him pretty quickly. He thinks he’s dead and that when he wakes up, it’s a sign his ghost is haunting the place. (Then he wonders why his ghost isn’t haunting the TV, since that’s where he’s spent so much of his time.) But the stabbing was only a magical trick so she could get some of his spirit energy. Lisara, the girl, is a top notch Grim Reaper from a powerful family, and she’s in the human world trying to find a powerful person to hook up with.

Could Ryosuke possibly be that person? Probably not: he’s lazy and dirty-minded and just all around average. Instead of being scared that a Grim Reaper is taking his essence, he’s just flipped out because it’s lowering his libido and he doesn’t want his “adolescence ruined.” He also doesn’t like it when she makes him get rid of his adult materials, and she makes him eat all sorts of gross-looking (healthy) foods from her dimension, like eyeballs. Still, he’s a good boy and eats the box lunches she prepares for him.

Lisara might be a Grim Reaper and there might be some gruesome imagery, but So, I Can’t Play H is no horror manga. It’s a fanservice-y relationship comedy, with an intense and powerful girl and a hapless and do-nothing boy, two character types who have shown their faces in many fanservice-y manga before this one.

Fanservice is something well-known in manga and fairly common. So, I Can’t Play H isn’t the best of the fanservice manga, but it does its job of being zany and ridiculous. Lisara is seen in various compromising outfits and even with his libido down, Ryosuke is still doing enough to have more than lived up to his nickname of Erosuke. (That’s a joke for all you otaku out there.)  The supernatural angle does give the manga more room to play in the world of fanservice, keeping magic involved as the two main characters have their wonky adventures together.

For Minecraft fans, the young-at-heart and people who know young Minecraft fans, Danica Davidson’s middle grade Minecraft novel Escape from the Overworld is now available and its sequel, Attack on the Overworld, is released October 6. You can also listen to the audio book, which is narrated by anime voice actor Dan Woren of Robotech and Bleach.