A few years ago, we had the opportunity to speak with Taliesin Jaffe, a veteran of anime and video game voice acting with countless acting, direction and script adaptation credits to his name: Hellsing Ultimate, Ultimate Marvel vs. Capcom 3, R.O.D. the TV, and many more.

In this second interview, we talk with Jaffe about his role in the recently announced Vampire Hunter D project from Unified Pictures, the differences between anime and video game voice work, and Evil Ken.

Taliesin Jaffe: It depends on the company. Some companies will just come to you with a cast list saying “these are the people we want.” Some ask you for four or five options for every character, and every now and then you’ll get someone who says “well, you cast the game and I’m sure it’ll be fine.” That’s the best way.

OUSA: Can you cite any projects where that’s happened?

Jaffe: Sengoku Basara: Samurai Heroes (the game) was almost entirely just me sitting down and making decisions on paper. There were a few where they said “we want this person to play this person,” a few members of the main cast, for example, and then once they’d made their three decisions they left the rest up to me. And I was like “yeah, that’s great, I can work with that.”

OUSA: Do you have a sense of why they gave you so much leeway there? I mean, both SFIV and Sengoku Basara are Capcom, so why the huge difference?

Jaffe: Capcom is more a series of fiefdoms than a cohesive, single unit, and it was that particular fiefdom that was a little more relaxed. The budget for Sengoku Basara, I think I can say, was way, way higher than the one for Street Fighter IV.

Jaffe: I know. (laughs) They were throwing money around, whereas with Street Fighter there could occasionally be an argument over a matter of $200.

OUSA: Was this at all related to the fact that Basara was made into a recent anime with an existing cast, or…

Jaffe: No. (laughs) They were vaguely aware of the anime but it was actually… [Funimation voice director] Chris Bevins and I were the ones who brought it to their attention that Funimation had the rights to the anime. “You know, guys, you and Funimation should talk sometime. Maybe we should share casts, wouldn’t that be cool?”

So we decided we’d share casts, and asked Capcom if they wanted to be involved. That’s why the anime has about half the same cast as the game. We kinda just decided to take it upon ourselves to do that.

OUSA: A few years ago you made a post on your tumblr about the thought process behind writing and adapting the English versions of Ryu, Ken and the other “shoto” characters in Street Fighter, using the Arthurian Legend as your basis. Can you talk about what your process was for doing that for the many other characters in the game?

Jaffe: Well, I had this massive sticky note grid where I charted out where everyone kind of fit in. It was spectacular. It was much easier to do that kind of thing on the first iteration of the game before we had to keep adding characters. Sticking more notes onto that grid got very frustrating. “Well, I can’t adjust anything on layer 1 anymore, so now I just have to make layer 2 work…”

Creating a cast like that where everyone sounds different and you’re never going to get confused as to who’s who… Like if you shut your eyes and can figure out who’s on the screen just by listening, I’m very happy. If you can read the script and tell who’s who just from the dialogue, I’m even happier.

That ceased to be possible once we got into the final iterations of the game. We had characters where there was just too much crossover both on the page and vocally, and there came a point where I just had to give up.

OUSA: Was that when Evil Ryu showed up, or…

Jaffe: No, I was completely prepared for Evil Ryu. When we cast Kyle Hebert as Ryu I told him “you booked this because of Evil Ryu. It’s not gonna be this year, it’s not gonna be next year, but eventually when we get to it, we’re gonna remember that this was part of the plan all along.”

The whole idea of Ryu in the first place is that he’s a Lancelot character, and I was prepared for the corruption of that character from the very beginning. We knew we were gonna go there, and actually part of the first audition for Ryu was, I had a couple lines I wanted them to read specifically in that darker vein.

There was a reason we didn’t just play that character as a traditional Japanese hero voice, “the answer lies in the heart of battle!” with this kind of pomposity and breadth. We leave that for Ken, because if… well, if they turn Ken evil it’s gonna be weird. I’m not even necessarily sold on the new costume they gave him.

But with Ryu the nice thing was that when we were first defining the character, since we started him at such a reserved place all of his vocalizations were very small and very reserved. He didn’t have a lot of big lines, so to make him Evil it was just a matter of allowing him to get loud and lose control. It’s all just about a loss of control for the character. So yeah, we were prepared for him from the beginning.

OUSA: Did they tell you in advance that he was coming or did you just know? You’ve mentioned that Dee Jay and T. Hawk’s voices were recorded before Super Street Fighter IV (the game they actually appeared in) was announced. Was this along the same lines as that?

Jaffe: They were not big sharers, especially at the beginning. The game where I had the most cooperation from them on was Marvel vs. Capcom 3. They were very, very good about sharing information on that one, and then for Ultimate they were just amazing. They brought out so much data. Not quite everything I could have ever wanted, but a lot, more than I’d ever seen. A lot more articulation of what they wanted.

Part of that was because they were English voices that were not going to be redone in Japanese, so there were chunks of the process that they treated as if it were the Japanese part of the process, which made a difference.

OUSA: Can you talk about the interplay there between the American and Japanese sides of production?

Jaffe: It felt like Capcom was terrified of insulting Marvel, and Marvel had such better things to do than even care about the game. (laughs)

Marvel’s involvement was… they wrote the script and okayed the script for their characters, although we still took liberties that they all wrote off on. To be fair, we didn’t do anything that was off brand, and we knew the characters really, really well. They also provided a complete cast list of the actors they wanted for all the Marvel characters.

Some of it was better thought out than others. We were never consulted on casting and I sort of wish they had — not that anything came out poorly — but there were things that were difficult that should not have been difficult. We had these poor actors come in who sometimes had never done a video game before, and we told them “okay, you’re going to be screaming for two hours and we can’t have you lose your voice.” We were practically running a fighting game class, and I was taking people through the motions four times a day.

Capcom was there and paying attention, but they didn’t really know the IPs involved, and were terrified of doing something insulting towards Marvel, so they were very grateful that Jonathan Klein and I both knew our Marvel extremely well. We’re very big Marvel fans, so they’d constantly be asking us questions about what was good or not. They even showed us options for character skins they were considering. We got to do some scripting as well.

I am very proud of that game and how it turned out, and on the Capcom side of things they didn’t have a cast list and we got to play around a lot more.

OUSA: Are there any particularly memorable moments from that side of the recording process you can share?

Jaffe: I have piles of takes that they didn’t use. Spider Man and Deadpool alone probably have something like 2-300 takes where we just started making things up and getting weird. There was a particularly good line I’m trying to remember that actually dropped the actor playing Spider Man onto the floor giggling… It was something like Spider Man talking to Ryu, and he says something like “Hey, Karate Kid, Ralph Macchio wants his look back. BOOM!”

And then he was on the floor, five-minute hold on recording. Then for Deadpool there was so much… just Bea Arthur jokes. Hulk we had a lot of fun with, too, coming up with the names Hulk would refer to other characters by. Poor Fred, I have no idea how he managed to blow through those without losing his voice. 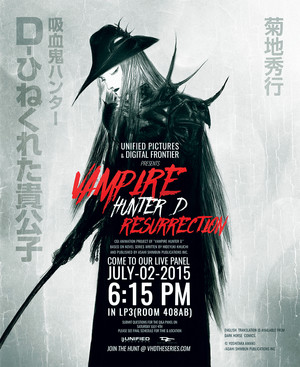 Jaffe: Mostly what I can talk about is… we’ve done interviews elsewhere already, and most of what you probably know from reading those is that we’re still figuring a lot of things out. Meetings are just happening, we’re just beginning to talk about the style we want, scripts haven’t been written yet.

I definitely have things I’m suggesting and putting forward, but at this point it’s just a lot of “if we had all the money and all the time in the world, what would we do?” Before reality crushes all those dreams. I love the studio, and the atmosphere and energy of it, and the Japanese seem very excited and… there’s just so much I can’t talk about.

The stuff they’ve put forward and their sort of design points have been really exciting. If it comes off half as well as the stuff we’ve been pitching out there, it’s going to be amazing. The official Vampire Hunter D twitter feed will have a lot of stuff on there. People are wondering if we’re going to be bringing back the original cast, things like that, and I of course always want to recast everything. MINE!

Once official production starts and there’s meat on the bone, which will be pretty soon, their goal is to be as open with the process as humanly possible, so people can really see the development top to bottom. Should be exciting.

For more interviews with anime voice actors, directors, animators, and other industry creators, check out our interviews tag page.

Get Your Hands on Sword Art Online’s Sinon’s Specs
So, I Can’t Play H Puts a Supernatural Spin on Fanservice