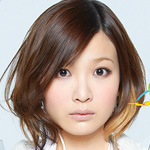 San Francisco’s J-Pop Summit Festival 2014 announced a new addition to its lineup with Japanese rock singer May’n as an official Guest of Honor. May’n will be appearing at J-Pop Summit as part of her 10th Anniversary “Dots and Lines” World Tour.

The J-Pop Summit Festival will be presenting a May’n Special Live Concert at the famous SF live venue Slim’s on Sunday, July 20 at 8:00pm. Advance tickets are available along with special VIP show packages that include an exclusive meet-and-greet with the artist. Details on the Slim’s show are available here.

In addition to her theme song work on anime like Accel World, Aria: The Scarlet Ammo, Shangri-La, Blood Lad, and many more, May’n is known as the singing voice of Macross Frontier‘s Diva of the Galaxy Sheryl Nome. Her first performance in SF took place as part of her 2012 “May’n Rock Your Beats” World Tour.