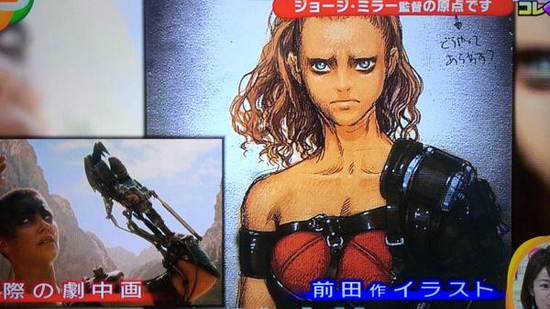 This weekend, Mad Max: Fury Road finally, finally opened in Japan, and to mark the occasion, the morning TV show Mezamashi Doyoubi showed off a neat Japanese connection to the film.

As it turns out, anime designer and director Mahiro Maeda (Gankutsuou: Count of Monte Cristo, Blue Submarine No. 6) contributed character designs to the film.

As Maeda explains in the segment, his designs were originally created for the canceled Mad Max anime film, but Mad Max director George Miller ended up sticking close to Maeda’s look when creating the live-action version (albeit with slightly less hair for Furiosa).

Maeda, who has directed several segments for Hideaki Anno’s Anima(tor) project, is best known for his Evangelion and Studio Ghibli designs, as well as his work on international projects like Kill Bill and The Animatrix.

And now, of course, Mad Max.

View all posts by Matt Schley
Star Ocean 5 Returns to its Roots on U.S. PS4’s in 2016
Crunchyroll to Stream Live-Action Death Note