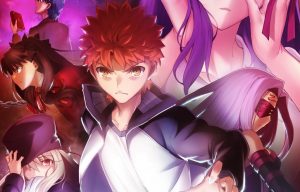 The second of three Fate/stay night anime films is coming to theaters in the United States and Canada on March 14, so Fathom Events is here with a new English-subtitled trailer. The movie opened in Japan on January 12 and managed to hit the billion yen mark in just 12 days, and tickets for the North American screenings are now available.

Check out more footage from Fate/stay night: Heaven’s Feel II. lost butterfly before it makes its limited theatrical debut below.