“Hard science fiction,” sci-fi based somewhat in reality (think 2001, not Star Wars) is kind of hard to come by in the world of anime. So we’re pumped at this week’s announcement of a new hard sci-fi series called Knights of Sidonia.

The series, which is set to debut in the spring of next year, is based on a manga of the same name by author Tsutomu Nihei (Blame!, Wolverine: Snikt!). 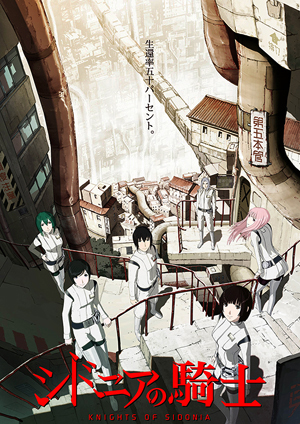 The series is rendered in CG and is the 30th anniversary project for Polygon Pictures, who did the CG work on Ghost in the Shell Innocence and Sky Crawlers, among many other works.

Knights of Sidonia takes place in a future where humans fled Earth after it was destroyed by giant spacefaring monsters called the Guana. Now living in space, humans defend themselves from the Guana with mecha called Guardians.

Verticial Inc. has released the first five volumes of the Knights of Sidonia manga in the States, so there’s plenty of opportunity to see what it’s all about before the anime hits.

Update 7/9/14: The show is out, so click here to read our full Knights of Sidonia review.