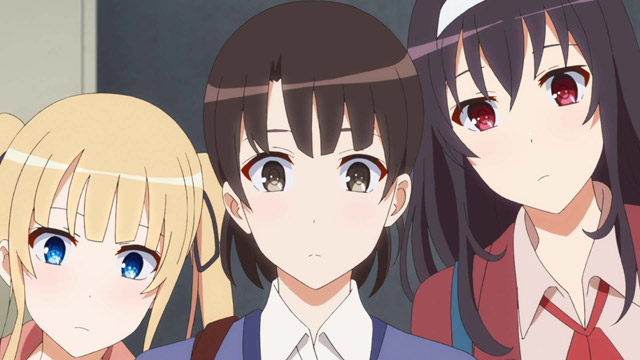 The Saekano anime, based on the light novel series by Fumiaki Maruto, is set to continue with a second season. We’ll have to wait a bit for the follow-up, though, because it’s currently planned for an April 2017 debut on Fuji TV’s noitaminA anime block.

The first season of Saekano -Hot to Raise a Boring Girlfriend- streamed on Aniplex Channel, Hulu, and Crunchyroll, the latter of which describes it like so:

One day, an otaku high school student Tomoya Aki has a fateful encounter with a girl. This meeting inspires Tomoya to design his very own “gal-game” featuring a heroine modeled after the girl he saw. In order to make his desire a reality, Tomoya must persuade a few eccentric “creators” such as the ace member of the art club, Eriri Spencer Sawamura and the school’s top student, Utaha Kasumigaoka to join his development team. Meanwhile, Tomoya is shocked to learn that the girl he idolized as his muse for this whole project was none other than his boring classmate, Megumi Kato!