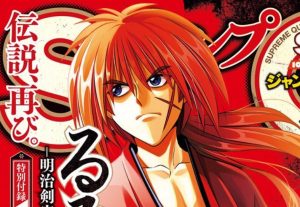 Back in February, Rurouni Kenshin author Nobuhiro Watsuki was officially fined for possession of child pornography. He ended up having to pay a total of ¥200,000 (about $1,845), but did not face any jail time as a result. Now Jump SQ. is here with news that Watsuki’s Rurouni Kenshin: Hokkaido Arc manga will resume in the magazine on June 4.

Jump SQ. apologized for the hiatus and had the following to say about concerns surrounding the manga’s return:

“The author spends his days reflecting and with remorse, and [we] think as though it’s our obligation as a publisher as well as his as an author [to] make a way for us to reply through the work to the various opinions we’ve been getting, and so, from the July issue, which goes on sale June 4, serialization will resume.”