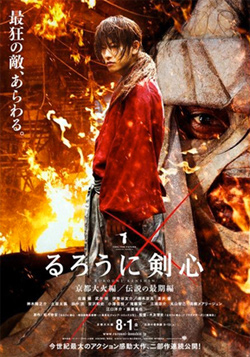 Otaku USA e-News Flashback 2012: Your faithful editor and film reviewer pops out of a theater in Tokyo’s Roppongi neighborhood and heads to a cafe next door to pen his review of the new Rurouni Kenshin film, by which he is not particularly impressed. While the movie features some above-average performances, the plot and tone are scattershot, feeling more like a string of TV episodes than a feature film.

Despite failing to impress this author, Rurouni Kenshin made a boatload of money at the Japanese box office. While there were initially rumors this would lead to a TV series, two feature film sequels, shot back-to-back, were announced for August and September of 2014.

So flash forward to the present, where I went into the second Rurouni Kenshin film, Kyoto Inferno, expecting more of the same TV-on-the-big-screen mediocrity and emerged two hours later happily surprised by an impressive, exciting motion picture.

What made this Kenshin so much better than the last one? Let us count the ways.

For one, the source material helps. Kyoto Inferno adapts the first half of Kenshin‘s Kyoto Arc, which many fans consider the best part of the manga. The story pits two former assassins against each other: Kenshin, who has vowed to give up killing, and Shishio, who once fought on the same side as Kenshin but was betrayed and immolated, returning as a scarred madman bent on taking over Japan.

The film’s full of political intrigue, and knowing a bit of Meiji-era Japanese history will probably help viewers understand the context, but at the heart of the story is the battle between Shishio and Kenshin and whether Shishio’s pure evil will cause Kenshin to break his vow and return to killing. 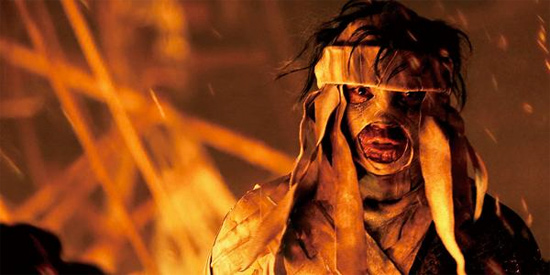 This tighter focus on one central thread (unlike the first film, which had to introduce the characters and the setting) helps the film move along at a brisk pace, feeling much shorter than its 140-minute runtime. It also establishes a consistent tone: where the first film bounced uncomfortably back and forth between jokey and deadly serious scenes, Kyoto Inferno is a consistently serious, high-tension movie.

That’s not to say there isn’t any humor in the film, but here it’s restrained, baked into the script in a more subtle (and ultimately funnier) way.

Finally, Kyoto Inferno features a lot more movement than the first film, bouncing back and forth between Tokyo, Kyoto and cities in-between. This allows for some interesting cross-cutting between groups of characters in different places, plus some quite impressive sets. I wouldn’t be surprised to hear the budget had been upped for these two sequels: both the design work and the fight choreography are pretty impressive. 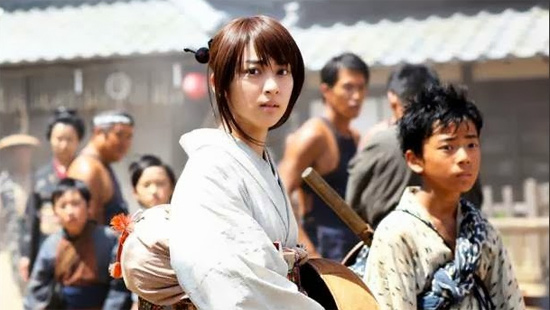 All this is not to say the film is flawless. Like most manga or anime adaptations, it can be hard to take the film seriously when it looks like everyone’s running around in cosplay. There’s a balance to be struck between the characters resembling their counterparts in the original manga and looking like real human beings, and Kenshin occasionally strays too far toward the former. It may just be the color palette of the film, but it almost looks like certain actors (Emi Takei as Kaoru and and Munetaka Aoki as Sanosuke) have been painted with head-to-toe makeup to appear more “anime-y.”

And like other two-part films, Kyoto Inferno doesn’t actually end: we’ll have to wait for the third film to really judge the project as a whole. Thankfully, unlike certain franchises that’ve split their two-parters over the space of a year or more, the third Kenshin film is due out next month.