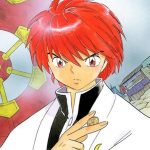 Master manga artist Rumiko Takahashi is getting ready to end another one of her long-running series. According to an early preview of Weekly Shonen Sunday, Rin-ne will be coming to an end soon, with three chapters left to go.

Rin-ne, AKA Kyoukai no Rinne, has been running since April 2009, and the 39th volume was just released in Japan. That puts it right alongside a few of Takahashi’s other major series, including Urusei Yatsura (34 volumes), Ranma 1/2 (38 volumes), and quite a few shy of heavy-hitter InuYasha (56 volumes).