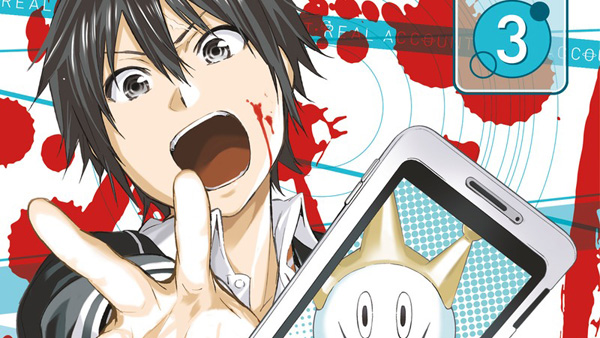 Stories about being sucked into virtual worlds have proliferated since their inception—from the early 1980’s Guardians of the Flame novels about a D&D group transported into the game narrative, to Tron early in the history of the video game, and more recently in franchises like .hack and Sword Art Online. Okushou and Shizumu Watanabe’s manga Real Account borrows a similar premise, with two key differences: first, it’s focused more on social networking than games, and second, rather than an adventure story, the virtual world plays host to a life-or-death competitive thriller.

High school student Ataru Kashiwagi doesn’t hang out with his classmates. He goes home to have dinner with his sister Yuri, partly out of solidarity after the loss of their parents and partly because they’re flat broke. His free time is mostly spent hanging out on Real Account, a mega-popular social network. One day 10,000 people—Ataru among them—are somehow mentally sucked into Real Account. 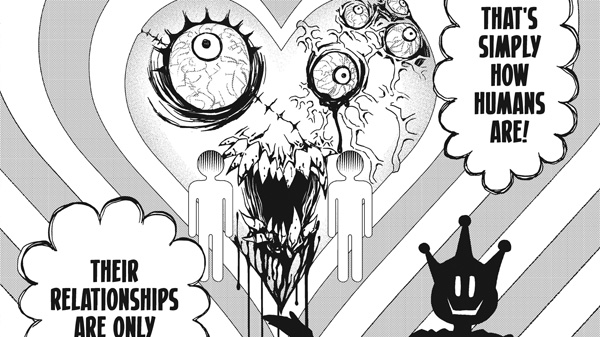 Someone dressed as RA’s mascot Marble announces that they’ve all been chosen to compete in a number of deadly challenges. As one might expect, the old “if you die in the game you die for real” trick comes into play, with the added bonus that all of your online followers die with you. And every moment of it is being broadcast to the rest of the world. 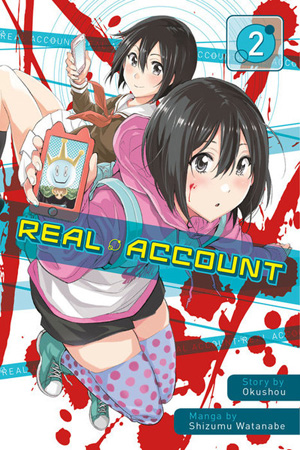 Real Account gets off to a bit of a shaky start, asking the same tired questions posed by a torrent of boomer thinkpieces. Do online friends matter? Do they really care about you? Are you just wasting your life with pointless narcissism and empty text? That said, the manga is much better than that sort of vacuous hand-wringing.

Marble isn’t painted as a hero bravely exposing hypocrisy, and one segment about a homely girl who portrays herself as a sexy idol online has a more humanizing and sympathetic resolution than I anticipated. Furthermore the tense, life or death games Marble sets up and that Ataru must strategize his way out of are the kind of story I like. Between wanting to see the next game and curiosity about where writer Okushou is going with his social commentary, I’m looking forward to the next volume. Recommended.