Since Sailor Moon first sparked a generation of magical girl-loving readers, it’s been released quite a few times in the West, from Tokyopop’s original MixxZine editions in 1998 to Kodansha’s reprinted and restored Pretty Guardian Sailor Moon. Now Moonies have a chance to read the manga in the gorgeous Eternal Edition. These larger, longer volumes feature full-bleed color images, glossy magazine-like pages, glittering covers, and more goodies that make this definitive way to experience the Sailor Moon manga. If you’ve been holding out on collecting Sailor Moon in English, these are the volumes to aim for. 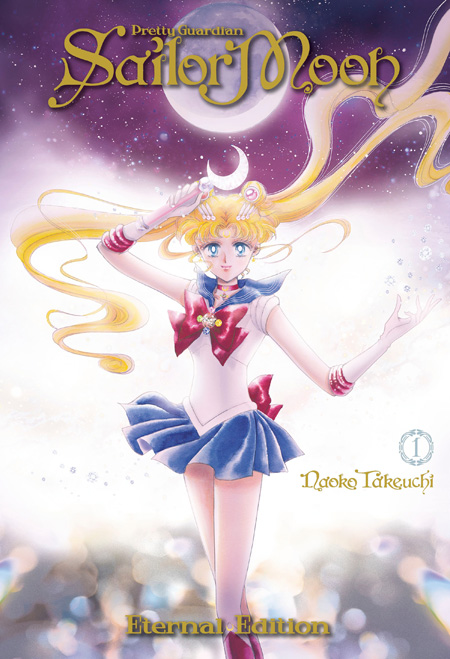 For the last few surviving otaku in the world unfamiliar with Sailor Moon, the series follows 14-year-old Tsukino Usagi, who loves video games, food, sleeping, and hanging out with her friends. She also idolizes the superhero Sailor V. One day, Usagi rescues a cat named Luna, who reveals that Usagi has been chosen to become the magical warrior Sailor Moon. As Sailor Moon, she’s to assist Luna in seeking out the long-lost Moon Princess and the legendary Silver Crystal. Usagi receives a magical brooch that allows her to transform, and the rest is history.

This volume covers the first few additions to the team, including Sailor Mercury and Sailor Mars, and Usagi’s budding romance with Mamoru, a hunky older student who may or may not have his own secret identity as Tuxedo Mask. Usagi is an instantly relatable heroine. We’ve all gotten a bad grade on a test, or wanted to spend time hanging out with friends or napping instead of saving the world.

Naoko Takeuchi’s iconic magical girl saga starts with a bang in this fantastic oversized first volume. It’s a treat for readers both new and old. If you haven’t delved into Pretty Guardian Sailor Moon or have only seen the anime series or its live-action counterparts, this is the best possible place to start, especially if you plan on collecting the entire series. Make sure to clear some space on your shelf first. Recommended.

One Piece: World Seeker Video Goes Behind the Scenes
How does Fate/Apocrypha stack up to the rest of the Holy Grail War?