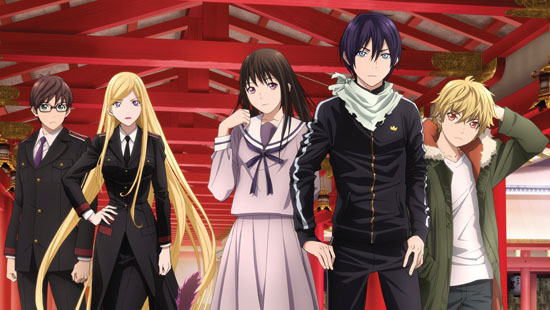 Depicting Japanese “kami” or “gods” as relatable modern characters is so common in anime that it’s hardly surprising anymore, but there’s something novel about Noragami’s take on the trope: a once powerful god of calamity who’s so unknown in the modern day that he relies on odd jobs, digging through trash, and panhandling to make ends meet. Modernization has (literally) met its maker.

Noragami also benefits from a refreshing change of perspective. The series began life as a manga in Monthly Shonen Magazine, but the hero is teenage girl Hiyori, who finds herself trapped between the human and spirit worlds after a run in with the aforementioned “Delivery God Yato.” While Hiyori is pestering Yato to return her to normal, he picks up a new Regalia—a ghost that transforms into a weapon in battle—in the form of moody preteen Yukine. The series follows the unlikely trio through a mix of comedic hijinks, emotional struggles, and ghost hunting battles, with a focus on the relationship between the three of them. 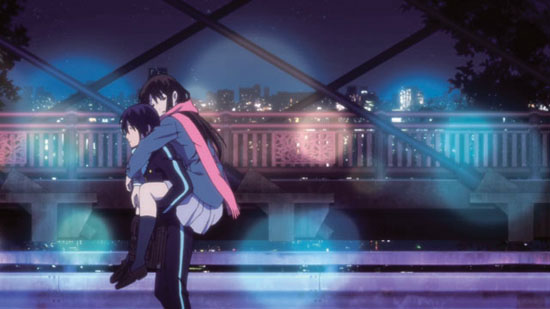 At first glance, Noragami has all the trappings of a typical light novel adaptation, with its attractive, likable teenage heroes who fight sympathetic bad guys using their magic powers, but it manages to toe the line between shonen manga bravado and the puerile wish fulfillment of light novels. Every character gets fleshed out, and none of the main cast feels like a simple audience insert character (though Hiyori is admittedly the least interesting of the bunch).

Having manga source material is especially helpful for the action choreography, which showcases studio Bones’ well-deserved reputation for smooth, punchy action. Unfortunately, the show has only a smattering of fights, the best of which are clustered near the end, but the comedy is where it really shines. There’s a lot of really fun banter playing on the cast’s quirks, including Hiyori’s obsessive crush on an MMA fighter, Yato’s delusions of grandeur, and the careless idiocy of Kofuku, the god of poverty. Easily the highlight of the show is a darkly humorous sequence in which Yato interrogates a depressed man in midair after accidentally pushing him off a roof. 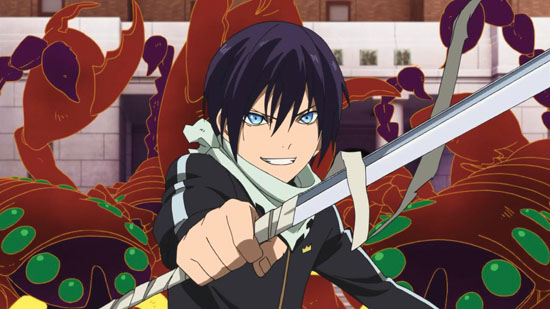 The versatile Toshihiro Kawamoto (Cowboy Bebop, Wolf’s Rain, Golden Boy) provides character designs for Noragami that are lively, expressive, and surprisingly simple. It’s the combination of the quirky cast and Kawamoto’s designs that make it so damn fun to just sit back and watch them all interact. The designs for the monsters, provided by key animator Masahiro Sato, stick out as well for their vibrant colors and organic, hand-drawn animation style.

Noragami has gathered a modest following since it aired in 2014, which I imagine owes something to its knack for pleasing everybody. The three main cast members are positioned such that an intrepid dojinshi author could ship them in any way they wanted: the straight Hiyori x Yato, the alternative Hiyori x Yukine, or the fujoshi’s pick, Yato x Yukine. Or, I don’t know, all three if you really want. 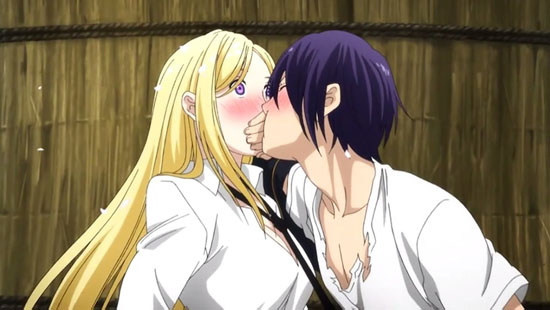 FUNimation’s English dub is listenable, although the high energy performances don’t always fit the tone and Jason Liebrecht’s Yato lacks the comical self-importance of Hiroshi Kamiya’s (Levi in Attack on Titan, Tieria in Gundam 00) Japanese version. The DVDs feature three full-episode commentary tracks from the English dub actors, but unfortunately no extras from the Japanese side.

Noragami never completely rises above its simple urban anime fantasy trappings, but it’s a reminder that predictable genre fiction, when done just right, can still be hugely satisfying. There’s another season on the way as I write this, and I’m definitely looking forward to more adventures with Hiyori, Yato, Yukine, and co. Recommended.