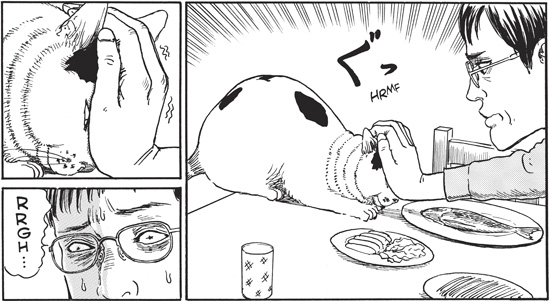 I don’t mean to overgeneralize, but Japanese people seem highly fond of cats. How else do you explain the famous cat cafés where people pay to hang out with a bunch of felines? I submit as further evidence the fact that cats are well represented in manga. What’s Michael came out in the 1980s, offering funny stories about an orange tabby who may or may not be influenced by Garfield. More recently, Chi’s Sweet Home has become popular—with a main character so adorable that she almost puts real kittens to shame.

Junji Ito’s Cat Diary is yet another manga about cats, but it’s a completely different animal. If you recognize the creator’s name, then you already have an idea of what’s new this time around.

Ito is the creator of nerve-shredding horror comics like Uzumaki, and even though Cat Diary is an autobiographical story about life as a pet owner, Ito brings all of his skill as a horror genius to the table, making this an atmospheric and creepy little manga. Ito alternates between a realistic art style and an exaggerated, horrific approach: sometimes the cats seem like malevolent phantoms, and J-kun (Ito’s fictional stand-in) frequently appears to be a maniac with bloodshot eyes and an oversized, gaping mouth. 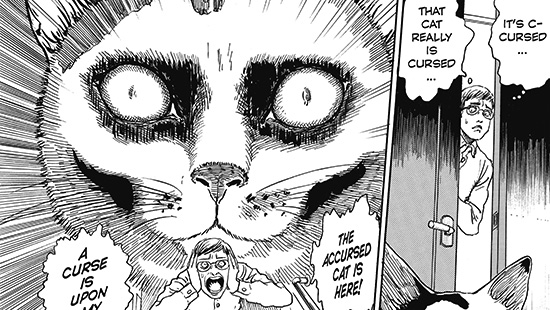 But there’s a method to the madness. Ito’s freaky drawings work as a perfect caricature of the intense emotions that a pet owner feels. Sometimes J-kun gets freaked out by the mysterious creatures roaming around his house; at other times he becomes too aggressively affectionate with the cats, 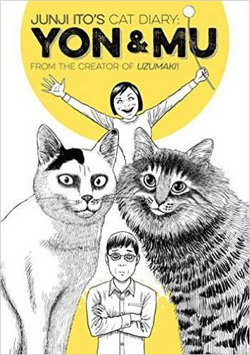 so he begins to look like a monster himself.

Some chapters cover aspects of pet ownership that you already expect. For example, one cat gets neutered and the other tries to run away. But Cat Diary is fresh because of its deep—and often embarrassing—focus on the psychology of a devoted cat-parent. J-kun becomes jealous of the way that both cats prefer the company of his wife, so he tries bribing them with food so they’ll cuddle with him instead. And when J-kun goes on a business trip, he’s wracked with guilt for having a nice time in a fancy hotel without his favorite cat.

These episodes mirrored my own experience as a neurotic cat-dad in a way that I’ve never seen before, and consequently, Cat Diary is the funniest comic that I’ve read in—please forgive me—a cat’s age. Recommended.

Fans of Japanese Idols and Bouncy Tunes Will Find Much To Love in Wake Up, Girls!
Akira Himekawa Working on More Zelda Manga