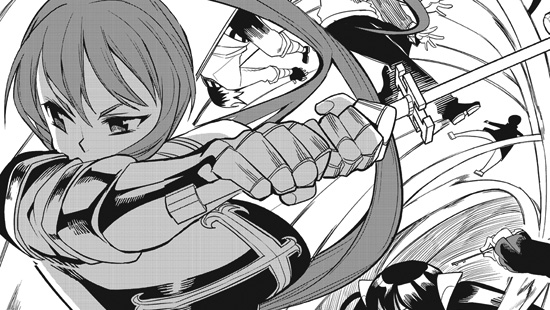 A spinoff of the popular shonen manga Fairy Tail, Fairy Girls follows a night of misadventures featuring four wizards of the Fairy Tale Guild: Lucy, Juvia, Erza, and Wendy. While out on a lark to see the sights of the capitol of Fiore, our heroes stumble into a plot to kidnap and replace the king. They deal with this threat using Fairy Tail Guild’s usual methods: mayhem and destruction in a fantasy world of fireball-flinging wizards.

I’ve never read Fairy Tail and my crash course in preparation for this review consisted of 21/2 episodes watched on streaming. Sadly, familiarity with Fairy Tail is almost a requisite to enjoying Fairy Girls, starting from both the book’s timeline (taking place during the celebrations for winning some kind of wizarding tournament), to the character’s dialogue filled with references and in-jokes. The middling plot attempts to squeeze in humor, fan service, and boobage between action sequences, but artist Boku can’t really do any of them well. 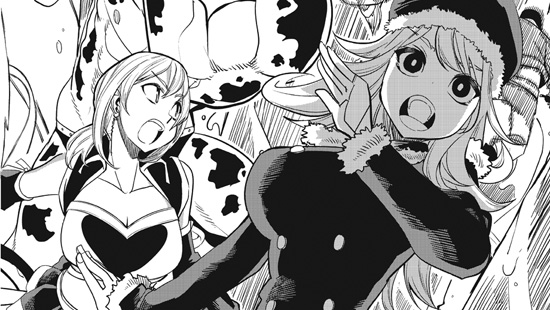 The anatomy is so-so and the ample breasts of the main cast are so poorly drawn that in many panels they look deformed. In a few cases one breast is bigger than other, or the other breast is lost in heavy black shading making for an odd lopsided uniboob. If this seems like a breast-heavy review it’s because large breasts are three out of four of the main character’s 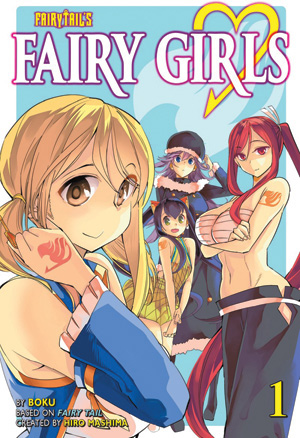 main assets (and presumably reasons for being in this spinoff).

There are a conspicuous number of worm’s eye shots and the perspective is, at times, questionable. The backgrounds are standard cut-and-paste jobs that come from a file or book labeled “generic fantasy backgrounds.” The art feels rushed and even the cover has an error: Erza’s breast binding doesn’t wrap around her body but simply disappears beneath her crossed arms, never to emerge on the other side.

Fairy Girls seems an obvious attempt to cash in on a popular franchise. In better hands, with better writing and art, maybe it could have risen above the marketing machine, but in the end it’s a mediocre product. True fans may get a lot more out of it but newbs should steer clear.