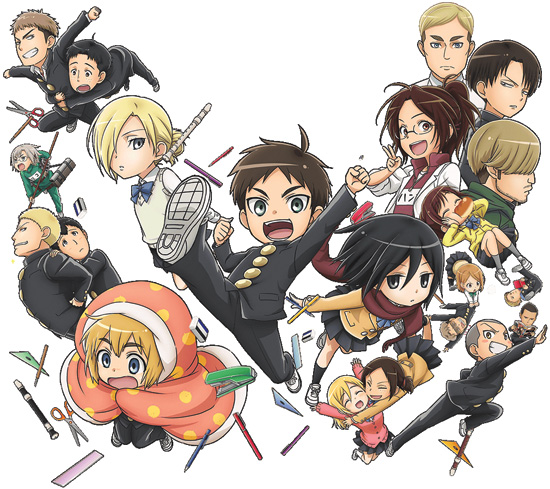 When Attack on Titan first crashed onto the manga and anime scene, fans were blown away by Hajime Isayama’s detailed world, brutal outlook on humanity, and willingness to kill seemingly important characters. So naturally, as fans wait for more Attack on Titan anime, what’s the best thing to tide them over?

That’s right. The Attack on Titan kids, except in middle school!

Saki Nakagawa’s manga, adapted into a 12-episode series of anime shorts by Production I.G back in 2015, transforms the dour soldiers of Attack on Titan into pudgy, chibi-fied middle schoolers at an otherwise normal school housing both human and titan students. They struggle with the challenges of winning dodgeball matches and cleaning the school building rather than witnessing giant humanoid monsters eviscerate their friends and family. All things considered, it’s a step up. 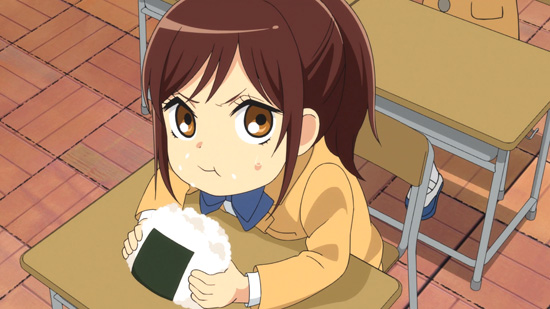 It would seem like a winning strategy, considering Attack on Titan’s wealth of beloved characters: Mikasa the silent but brilliant soldier, Jean the arrogant would-be leader, Sasha the overeating ditz. But unfortunately, Isayama doesn’t have much of a mind for comedy, and the poorly timed jokes in the original Attack on Titan rarely land in a way that evokes much more than an awkward chuckle. In Junior High, repetition reveals Isayama’s characters for the shallow caricatures they are, or at least shows a comedy severely handicapped by its inability to reveal more about its characters than its source material. Almost every character has only one joke, repeated ad nauseum. Sasha likes to eat in the original? She talks about food in every scene in Junior High. Oruo bites his tongue a few times? Every Oruo punchline in Junior High ends with him biting his tongue. This sort of reference comedy can be funny the first time you spot it, but after a few loops the merry-go-round just makes you sick.

The references that work are the more subtle ones that call back to specific scenes from the anime—in one scene, Armin defends Eren’s campaign for student council president using language that mirrors his speech at the end of the first anime season. The maneuver gear training sequence isn’t a part of military training, but the initiation for the “Wall Cleaning Club.” These scenes are often accompanied by short lapses into Isayama’s gaunt art style, a welcome contrast that makes the jokes a lot funnier. 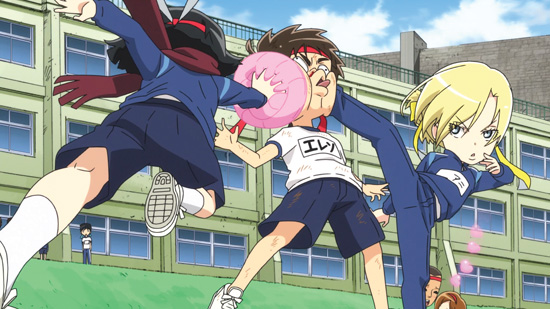 With that in mind, this is absolutely a series for people already familiar with Attack on Titan. It doesn’t spoil anything big from the first anime season, but most of its comedy relies on recognizing references to the original series. Plus, there are hints to some big twists from both the anime and manga if you’re paying attention.
Of course, I have a bit of a soft spot for hamburgers in anime (I run a whole panel about them at conventions!) so Attack on Titan: Junior High gets some extra credit for revealing via a series of recurring jokes that Eren’s driving motivation was never, in fact, killing the Titans, but recovering cheeseburgers that they stole from him. A man after my own heart.

Isayama is notorious for being unable to draw convincing human beings, and Nakagawa’s art in the Junior High manga isn’t much better, but the anime designs are probably the best these characters have ever looked. They’re instantly recognizable, but the rounder, more evenly proportioned designs are easier on the eyes than their original incarnations. 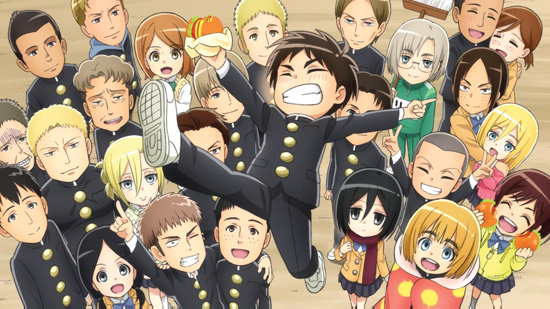 Junior High is at its best when turning Attack on Titan’s dark fantasy roots toward black comedy, transmuting the Titans from terrifying monsters into comic figures. Unfortunately, that’s not enough to make it either a particularly funny comedy or a suitable substitute for Titan-starved fans. In fact, Junior High spends so much time making fun of its characters that, by the end, you might come to the (correct) conclusion that Eren is a whiny baby who can only be tolerated on-screen when he’s the butt of a joke, thus spoiling the fun of any future Attack on Titan anime series.