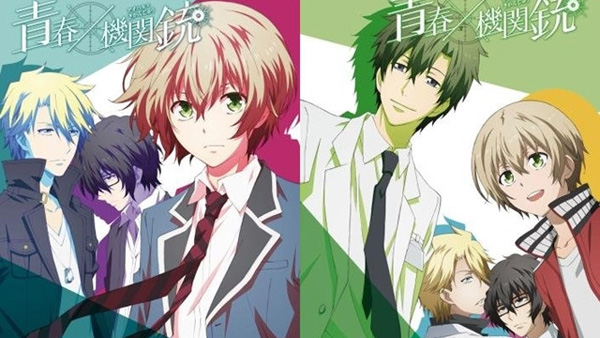 Aoharu x Machinegun starts out like Ouran High School Host Club, plus toy guns. Flat-chested tomboy Hotaru Tachibana thinks her friend was bilked by an unscrupulous host, the handsome Masamune Matsuoka. To avenge her friend, Hotaru shows up to the host club where Masamune works and challenges him to a fight. But Masamune’s weapon of choice is pellet guns, and he’s an expert with them! After Hotaru loses, trashing the club in the process, she has to pay for repairs and is forced to pay off her debt working for Masamune’s pellet gun club, “Toy Gun Gun.” Oh, and did we mention that Hotaru and Masamune are neighbors? (In the great tradition of manga everywhere, Hotaru lives alone in a small apartment building while her parents are overseas.)

The utter glory of Aoharu x Machinegun is that Hotaru, at first reluctant to play, gets addicted to the adrenaline rush of gun-based survival games. It’s a story about an otaku in the making, and it’s refreshing to see a girl enjoy and succeed in a hobby that most would consider a masculine pursuit. “Masculine pursuit” is no joke: Hotaru’s teammates remain ignorant of the fact that Hotaru is a girl, because she has short hair and wears a boy’s uniform to school. Disguised as one of the boys, Hotaru makes new friends like Masamune’s friend Tooru Yukimura, a hentai manga artist who draws a book called My Little Sister Is a Raptor. 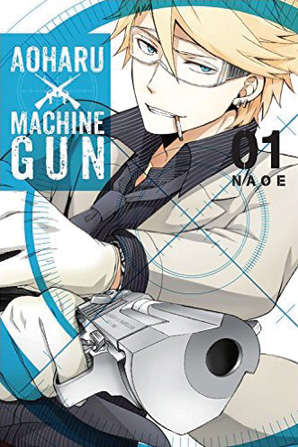 Though the book makes many jokes about yaoi and Yukimura’s possible proclivities, there’s zero romance in Volume 1. Hotaru stands out as a tough girl with a sense of justice, which isn’t unusual in itself, but coupled with her newfound love of war games it makes her more interesting than the average hobby-based manga heroine. The overall feel of Aoharu is that of a shojo/shonen mashup: a cadre of hot guys, a cute female sidekick for Hotaru, and plenty of toy guns all designed to look like the real thing. Unfortunately, only one chapter is devoted to the actual survival game, but the book promises to deliver more action in upcoming volumes when Hotaru and team are invited to a tournament. At times some the action scenes are a little hard to decipher, but the art improves noticeably as the book goes on. Readers can look forward to sports manga tropes as Hotaru meets wacky characters, faces rival teams, and trains to fight enemies of ever-increasing strength. Recommended.