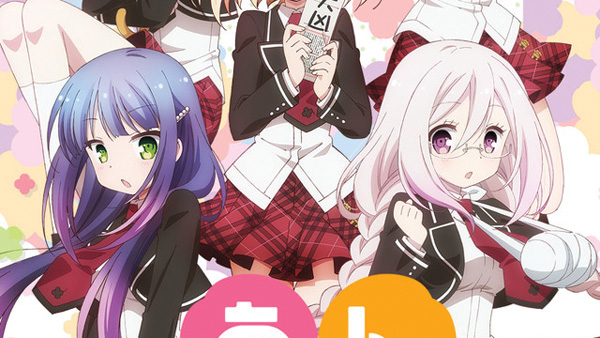 Hibiki can get lost traveling from Point A to Point B along a one-way street … that doesn’t have any intersections. Ruri is cursed with unrequited love … for a mascot featured on ubiquitous construction signs. Botan suffers from bird bone syndrome (osteogenesis imperfecta) to the point where she’s an expert in applying first aid … to herself. And titular character Anne? She’s kinda the whole shebang all wrapped up in an overexcitable and oddly optimistic package. Uniting all these (and more) unfortunate souls under one roof is Class 1-7 of Tennomifune Academy.

This prestigious school of learning develops its students’ talents to produce great individuals, but Class 1-7 is exceptional only in the fact that its hurdle is overcoming challenges in order to lead a normal life (i.e., achieve happiness). Those in Class 1-7, as opposed to every other student enrolled in Tennomifune Academy, are otherwise unable to develop their talents, let alone excel at anything, due to their misfortune, and this is where Anne-Happy has an aptitude for creating whatever kind of atmosphere is needed for yuks. 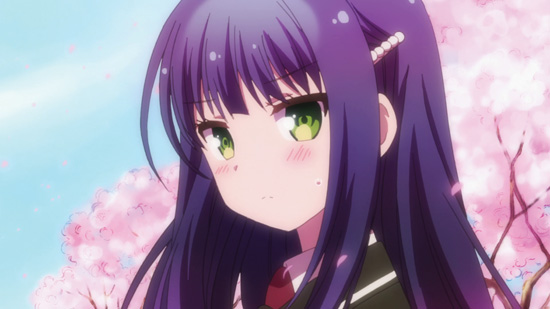 Based on Cotoji’s manga, Anne-Happy (alt: Unhappy Go Lucky) is what happens when unapologetically self-aware pandering to premise is added to the short character sketches of Azumanga Daioh and crossed with Working!!’s talent for timing and comical cliché wringing. It’s the moést fun you’ll have watching bad things happen to undeserving innocents without incurring any sense of guilt. There are chuckles to be had at the characters’ collective expense and chuckles to be had over the chuckles the girls are having at the expense of the other girls. It’s not highbrow humor, but there are some visual gags as well as compounded situations that manage to sucker-punch expectation in almost every episode to keep things fresh.

There’s really not much else here, and there really doesn’t need to be. The show’s shtick is not schadenfreude; the girls are too enthusiastic, and their misfortunes are portrayed mockingly from the start to negate any tone of looming suffering. Also, the girls have each other for sharing their miseries and collectively bearing their individual loads as to lighten them for all. This is fostered by the happy lesson plan, laid out by bipolar homeroom teacher Ms. Kodaira, which consists less of homework assignments than trials by fire assigned to forge and cultivate friendships and confidence. The time spent completing these daily lessons is what comprises the majority of the episodes. 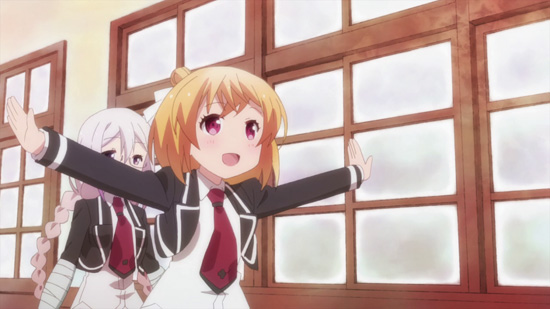 Each 30-minute episode contains multiple segments that are linked to that day’s assignment or serve as non-sequitur portrayals of the daily lives of (cursed) high school girls. Mundane situations, such as the high school fitness test, are usually leveraged to contrast cliché and premise, so unexpected slice-of-life humor interjected into the formula reaps some good chuckles. Short, five-second transitions between segments, handled by chibi versions of the
characters, are also usually good for a laugh in and of themselves. Deep into the series, however, a threat to redemption for everyone in Class 1-7 imposes unfortunate plot upon the show’s still enjoyable slice-of-life antics. Despite the blatant move of adding a conflict to force a resolution, Anne-Happy is Anne-Happy and
thus cannot be derailed.

Animation (SILVER LINK) and character design throughout this series does not come across as anything distinguishing it from similar slice-of-life comedies, and that may be on purpose. There are, however, brief moments of fluidity and detail that stand out against the standard execution. Also, there are some chances taken regarding occasional changes in style to suit tone in certain circumstances, but the characters’ nonverbal acknowledgements of each other’s weaknesses within the context of various situations are easily the brightest point of this series. All this equates to “good enough” given that comedy in this series relies very little on movement or visual flare and very heavily on writing/timing. 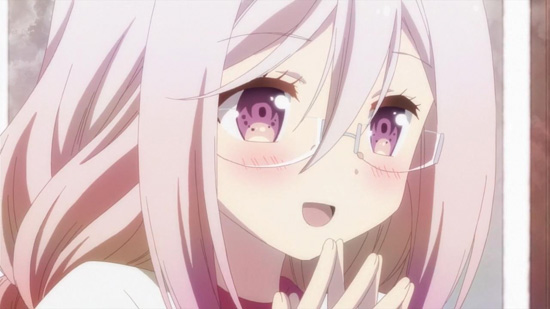 Anne-Happy is a fun watch if you’ve a sense of humor that leans toward the lighter side of dark. Recommended.