Pupa: A Twisted Take On Oreimo? 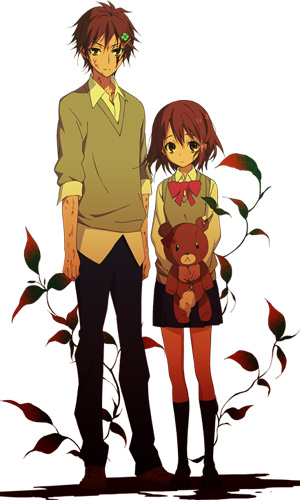 Perhaps it’s just us, but it seems like there’s been a recent spout of “brother-sister”-themed anime, the most notorious (or beloved, depending on which side you’re on) of which is good old My Little Sister Can’t Be This Cute, or Oreimo for short. But a show is in the works that has a decidedly different take on sibling love.

The show in question is called Pupa, and it’s set to debut this January on Tokyo MX TV, according to our friends over at Anime News Network. It’ll also appear on streaming site Niconico. For those of you who remember reading about Pupa on one of the internet’s myriad anime charts – it was originally set to premiere in the fall, but was delayed a few months.

The plot (and preview, for that matter) are not for the faint of heart. Apparently, Pupa is about a devoted brother and sister duo whose lives undergo a major change when the sister becomes a monster and, um, relies on her brother as a food source. Now that’s sibling devotion.

Set to play the brother is Nobunaga Shimazaki, whose voice you may recognize as Haruka from Free!. The sister, meanwhile, will be voiced by 16-year-old Ibuki Kido, who recently starred in – yep – OniAi, another forbidden love brother-sister show. We told you these things are everywhere.

Despite our general ambivalence toward the genre, Pupa looks like it might be set to put an interesting, horrifying spin on things. The director, Tomomi Mochizuki, has been at the helm of quite a few interesting projects, including House of Five Leaves, and the original manga has sold quite a few copies. We shall see.