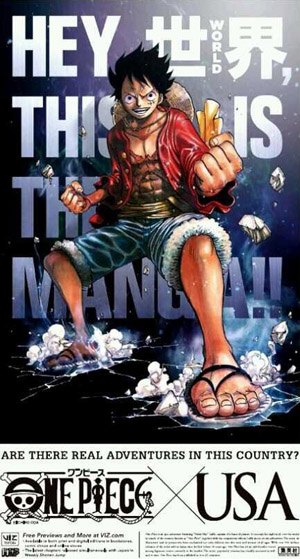 ne Piece and the New York Times. Two publications we never really expected be writing about in the same article, except maybe to comment on One Piece‘s rank on NYT‘s best seller list.

But no, that’s not what this piece is about.

Apparently One Piece has sold a total of 300 million copies in Japan (even more the world over), prompting One Piece publisher Shueisha to go on a crazy thank you campaign. They’ve printed big One Piece ads in major papers around Japan, which is no big shocker, but they also decided to lay one right smack in America’s own New York Times.

The full-page ad, which appeared in the November 21st edition, features a giant Luffy and exclaims “Hey World, This Is The Manga!!” Sure is, Luffy, sure is.

Viz, One Piece‘s American publisher, is also celebrating by releasing a digital retrospective, featuring covers of 69 One Piece volumes, an interview with creator Eiichiro Oda, and a short prequel manga. You too can grab the Viz retrospective for free before November 27th.

It’s unclear if any regular Times readers knew what the heck the ad was all about, but a few curious ones might give this One Piece thing a try. Crazier things have happened (like, say, a weekly manga running continually since 1997, selling 300 million copies and spawning 600 episodes of anime).