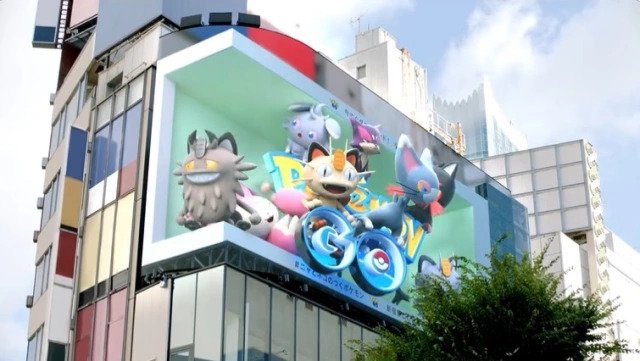 Pokémon GO has fans looking all over the place for Pokémon, and between now and September 5, there’s a place where feline Pokémon are going to show up more than usual in the game. I’m talking about the area around the Cross Shinjuku Vision monitor in Shinjuku, Tokyo. This 3D advertisement, which made a name for itself with a giant 3D calico cat last year, is now advertising Pokémon GO and highlighting the feline Pokémon.

You can check out a video of it here. First the iconic Pikachu is there, and is soon replaced by Meowth — who shows up in regular, Alolan, and Galarian versions— plus Litten, Skitty, Glameow, Purrloin, and Espurr.

The date August 8 was chosen to premiere this ad because it’s International Cat Day. However, the ad won’t just be up for one day. It will stick around until September 5, and during that time fans are told that more Pokémon will be showing up in the area for Pokémon GO! There will be one day when the ad doesn’t play, and that will be August 22, so that maintenance can occur. However, Pokémon GO will still be working that day.

The Pokémon website gave this description of Pokémon GO:

“Travel between the real world and the virtual world of Pokémon with Pokémon GO for iPhone and Android devices. With Pokémon GO, you’ll discover Pokémon in a whole new world—your own! Pokémon GO gives you the chance to explore real locations and search far and wide for Pokémon. More and more Pokémon continue to appear around the globe, including rare and powerful Legendary Pokémon.

As you move around the places where you live and visit, your smartphone can vibrate to let you know when you’re near a Pokémon. Once you’ve encountered a Pokémon, take aim on your smartphone’s touch screen and throw a Poké Ball to catch it—but be careful, or it might run away! Also look for PokéStops located at interesting places—such as public art installations, historical markers, and monuments—where you can collect more Poké Balls and other items.”