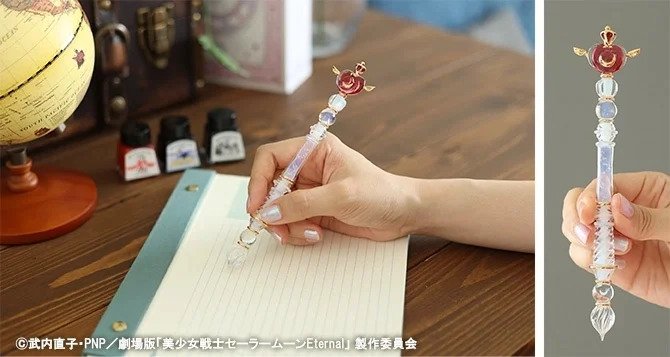 2022 marks the 30th anniversary of the Sailor Moon anime, and with the anniversary of a big franchise like this, there’s going to be a lot of merchandise. The latest is the “Sailor Moon Eternal Premium Frame Stamp Set,” which comes in two versions.

In the first version, you get Sailor Moon-themed postcards, stamps, folders and a collector’s box. This costs 6,300 yen (which is about $47.32).

With the second set, you get the same postcards, stamps, folders and collector’s box . . . and one of only 60 hand-made glass pens.

The glass pens are inspired by the Crisis Moon Compact in the Sailor Moon Eternal movies. The length of the pen is adorned with a pink ribbon, and the nib has a moon opal.

If you want to get this special set, it costs 60,500 yen (which is about $454.40). And while that price jumps up considerably for the set with the pen, it’s still cheaper than the more-than $13,000 they’re asking for this pair of Sailor Moon studded boots.

Kodansha publishes the Sailor Moon manga in English, and gave this description of the first volume: