One Piece Movie 6: Baron Omatsuri and the Secret Island 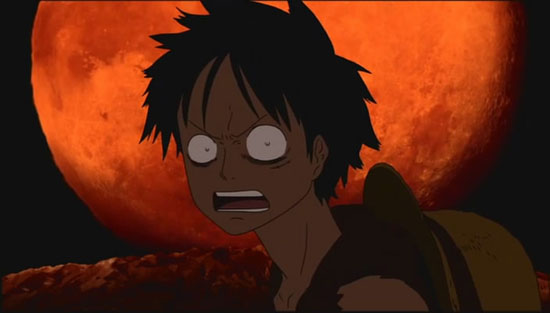 I mean this in the nicest possible way, but I’m pretty certain that this is the single most screwed up One Piece movie ever made.

One Piece reigns supreme as the top-selling manga in Japan and one of the most watched anime. According to Japan’s Oricon sales charts, the top 5 best-selling manga in Japan for 2010 were all the latest volumes of One Piece, and sales have more than doubled from 2009 when it was already an unstoppable juggernaut. I must confess that I, like so many others I know, fell behind on One Piece many years ago, during its rather long and so-so by comparison Skypiea arc.

Fortunately for me, I can still watch the movies. Like virtually every theatrical anime adaptation of a long-running Shonen Jump property, the One Piece movies are self-contained stories that don’t technically occur within the official timeline but don’t really contradict much of anything either. Call them “filler” if you may, but in about an hour or two you get a complete story featuring the characters you know and love. At a rate of one movie per year, I can at least keep up with these! So while it’ll probably be years before I get to reading the Water Seven, Enies Lobby, Impel Down etc. arcs, the movies can tide me over for the time being… wait, Mihawk finally came back? And nobody told me?! Hmm, I’d better accelerate my catch-up schedule! 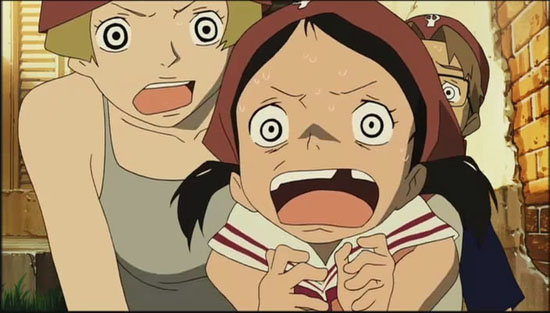 As I noted in my review of Crayon Shin-chan: The Adult Empire Strikes Back, every once in a while these annual kids’ movies that seem anchor-bound to a successful formula throw a curveball your way and tell a tale that’s a little different from what you’re used to. Most of the One Piece story arcs I’ve been exposed to follow this general pattern:

• The crew travels to a new island
• We’re introduced to a large group of never-before-seen characters, some of whom are bad guys, some of whom have superhuman powers and abilities
• Each individual member of the crew squares off against an opponent they’re best suited to fight against
• Maybe Nami gets kidnapped at some point

The inevitable conclusion is that our heroic Straw Hat Pirates save the motherlovin’ day, offer some heartfelt goodbyes, and sail off in search of another adventure. It’s a solid formula for success. 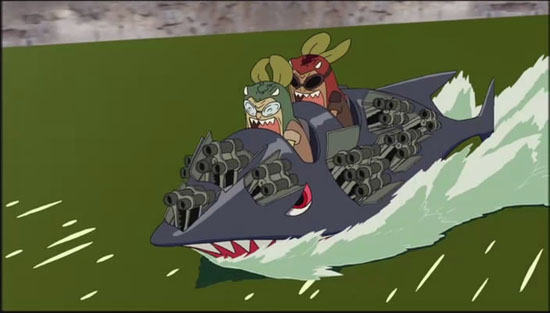 But in 2005 the sixth One Piece movie, sub-titled Baron Omatsuri and the Secret Island, would mix things up a bit. Few would have suspected such a thing at the time, but hindsight being 20/20 I can point out that this is the final film Mamoru Hosoda directed for Toei Animation before becoming a staff director for animation studio Madhouse, from which he would make The Girl Who Leapt Through Time roughly one year later. With this, it may be officially said that he departed Toei Animation in style.

One glance at the visuals tells you this isn’t going to be a “typical” One Piece adventure, as it looks remarkably different from almost everything before or since. The character designs for everyone are altered to look just a bit more realistic than their usual exaggerated cartoon selves without going so far as to be rendered unrecognizable. Everything’s a few shades darker than usual—fitting given its content—and the backgrounds resemble that of a surreal painting. The art may seem slightly odder than usual but the characters remain faithful to their usual selves. Upon discovering a message in a bottle containing an invitation for all great pirates to attend a luxurious resort named Omatsuri Island (if a “matsuri” is “a Japanese festival” then an “omatsuri” is presumably a really GRAND festival), Nami wants to go because of the promise of beauty makeovers. Sanji wants to go because pretty ladies will undoubtedly be there. Chopper wants to go for the magnificent feasts. Usopp DOESN’T want to go because he, like the viewing audience, can tell that it’s totally a trap. Robin finds the concept intriguing for its novelty, though she doesn’t directly come forth and say so. Zoro completely doesn’t care.

But for their straw hat wearing captain, Monkey D. Luffy, there’s no question that they MUST go. They are, after all, great pirates for whom the invitation is addressed. As the sixth movie in a mega-franchise, not much effort is expended toward introducing new viewers to who everyone is, but the first few minutes of the film convey everything you need to know. 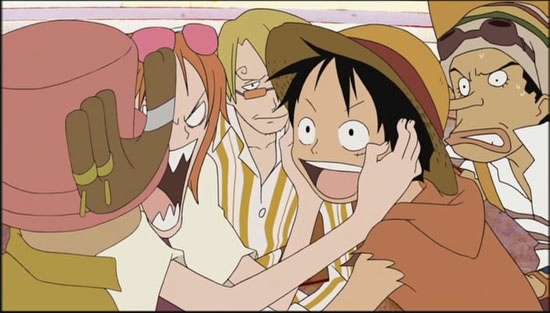 Upon arrival, Omatsuri Island doesn’t seem like anything special at first glance, but our heroes soon realize that it’s every bit the island paradise the note said it’d be. But if it’s so great, then how come they’re the only visitors? The residents of the island all have plants sprouting from their heads save for the island’s leader, Baron Omatsuri, who has a cute, smiling, talking dandelion affixed to his shoulder. He welcomes Luffy and crew, thanks them for accepting his invitation… and then immediately proceeds to subject them to a variety of rigorous challenges that seem straightforward but in reality are unfair by design. The Baron, who autocratically controls the island and everyone on it, has stacked the deck against the Straw Hats from the get-go as if he’s setting them up just to fail, when he’s the one that invited them to the island in the first place! The hurdles are cleared, but not without incident; seemingly accidental happenings result in a gradual fracturing of trust between comrades. As crewmates get separated, one by one they start to realize something’s not quite right with this place…and that they’re not as alone as they thought…

Much fan speculation has ensued as to whether the courtship and reception toward the Straw Hats as well as the true nature of Baron Omatsuri and Omatsuri Island itself are in some way allegorical to Mamoru Hosoda’s tenure at Studio Ghibli. Hosoda, after all, was originally slated to direct Howl’s Moving Castle until circumstances that will probably never be fully publicized caused him to depart, resulting in Hayao Miyazaki directing that movie himself instead. It’s an interesting hypothesis, and I think there is merit to it. For all their worldwide acclaim and financial success, from this outsider’s perspective Studio Ghibli remains an animation studio whose chain of command seems to be “Hayao Miyazaki says to do this, so you either do EXACTLY that or hit the road. Oh, and Isao Takahata’s around too, I guess, but we keep him in an underground bunker such that he only surfaces once every 5 to 10 years before vanishing again.” Ghibli has been around for 25 years, yet in all that time they have yet to truly usher in a new marquee talent beyond its original founders. For the few occasions in which Studio Ghibli has let someone else direct a feature film besides Miyazaki or Takahata, that person has never been permitted to direct another title with them since. Has Studio Ghibli’s apparent “one strike and you’re out” policy reached an end? Let’s see if they let Hiromasa Yonebayashi make another movie after his directorial debut, 2010’s Arriety the Borrower, before attempting to answer. 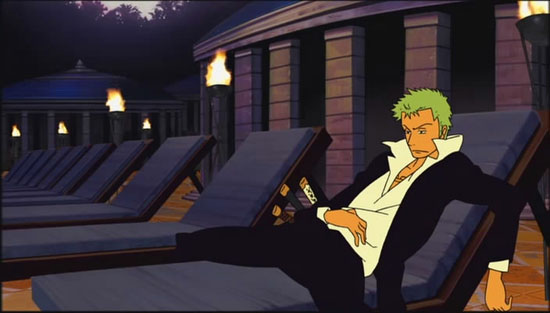 Both the visuals as well as story structure deviate from the norm in Baron Omatsuri and the Secret Island, but nowhere is that departure more clear than the climax of the film. In a series that is first and foremost for young children, a series famous for the fact that pretty much nobody ever actually dies outside of flashbacks detailing someone’s tragic past, this installment of One Piece features what can only be described as figurative gallons worth of “nightmare fuel.” In true cartoon fashion, Luffy and the gang have frequently endured hellacious amounts of punishment only to be little worse for the wear a few chapters or episodes later, but until this movie Luffy had never been extensively tortured then made to be a stand-in for Jet Li at the end of Hero. The rest of the cast is amalgamated as some sort of twisted H.R. Giger-like effigy that’d fit right in with Apocalypse Zero, organ-splattering evisceration and all. Sure, in the back of your mind you tell yourself that everything will be okay in the end because there have since been 5 more years worth of TV episodes, movies, and specials, but that’s the beauty of One Piece: it has a near-unrivaled ability to get you emotionally caught up in the moment.

FUNimation has to date not released any of the One Piece movies in the US with the exception of the eighth movie which is a highly-condensed version of the Alabasta arc that remains to this day the last story arc of the series proper that I was able to complete. I honestly have no idea whether any others will ever actually be released here seeing as how One Piece isn’t regarded in the US as “the next Dragon Ball” the way it is elsewhere in the world. But with ten One Piece movies released to date, Baron Omatsuri and the Secret Island ranks among the top tier. More people should see it.