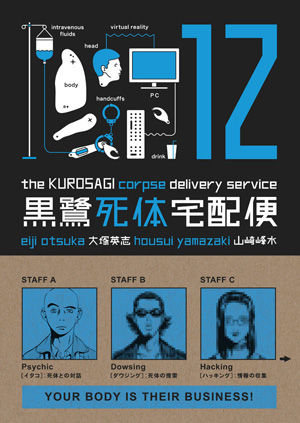 Oldies but goodies seems to be the theme of this week. We’ve got a series long in the waiting for a new volume and several new editions of previously released titles well worth the second chance. Add on top some full-color craziness and some continuing titles from Kodansha and you’ve got yourself a bag full of new bookshelf buddies!

Without a doubt my most anticipated title out now is Kurosagi Corpse Delivery Service (Vol.12). We haven’t seen a new volume of this character-driven supernatural suspense story since September 2010. It’ll almost feel nostalgic picking up that familiar cover at this rate! Within all the episodic plot lines of corpse discovery and mystery-solving, an underlying plot has been growing and I’m really eager to see how it plays out. In this twelfth volume, the Kurosagi crew find two bodies in the woods which lead them to investigate an online community where not every player maintains a pulse on the other side of the computer.

Drawn & Quarterly is serving up an abundance of Yoshihiro Tatsumi titles today. Some readers may recognize the name first from his 800+ page autobiographical tome, A Drifting Life. While most of the books out today are re-releases of older content, Fallen Words is a book new to English publication with this edition of short stories which “takes up the oral tradition of rakugo and breathes new life into it.” Rakugo is traditional form of Japanese entertainment where a single seated individual tells a sprawling verbal story using only small voice changes and props. It’ll be interesting to see how something so distinct in practice will translate to manga while maintaining the same tone. 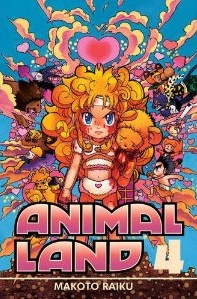 Kodansha Comics brings three series closer to completion with new volumes of Animal Land, Deltora Quest and Shugo Chara Chan. The series’ leading ladies take to the covers of all three making for some colorful new visual additions to their individual stories of survival, adventures, and just being plain ‘ol cute.

NBM Publishing adds another manga title to their title library with another one-shot release – Rohan At The Louvre. The story is about a manga artist who asks a museum to unearth a painting said to have been cursed after being painted using “the blackest ink ever known.” Created by Hirohiko Araki – best known for Jojo’s Bizarre Adventure – I’ve no doubt this story of an artist struggling against a 200-year-old cursed painting will be something to remember! This stylish looking book is also published full-color and hardcover. 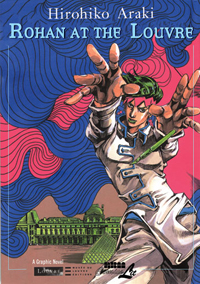 Vertical Inc.’s new book this week is a revisit of some old material as well, providing a new opportunity for manga readers to experience Osamu Tezuka’s Dororo. Originally three volumes, this omnibus edition clocks in at over 800 pages and contains the whole thing in one affordable go. Dororo is about a general who promises 48 demons his unborn son’s body parts in exchange for ruling the land. When the boy is born, he’s cast into the river to die only to be saved by a sage who fits the boy with prosthetic versions of all the organs and limbs he’s missing. Joining up with a spunky little thief named Dororo, the now grown young man – Hyakkimaru – sets out on a journey to retrieve his original body parts by slaying the demons who possess them.