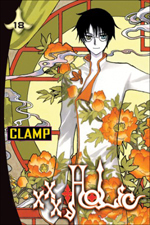 This is the last On The Shelf article before Christmas, so for those who celebrate it, a Merry Christmas to you! And a big Happy Holidays to all. With a few days left for gift hunting, don’t forget how easy a volume of manga is to wrap and how neatly they stack under the tree!

With only two volumes left until Del Rey’s last manga property is complete, this week sees CLAMP’s XXXHolic (Vol.18) out for our buying pleasure. Watanuki is now as settled as one can be in his situation, taking Yuko’s place as the one in charge of her shop and delivering magical aid to those who seek it. Unfortunately his newest ‘guest’ has a bit of a stalking problem and the way to see this issue through to the end could put Watanuki’s loyal friend, Domeki, at great risk. Interesting as the story is, I’m constantly impressed by the sheer amounts of eye-candy the artwork provides. It has a gorgeous use of solid blacks that differs from CLAMP’s more screen tone reliant series. 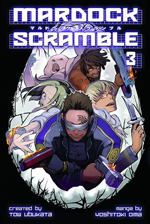 Another manga series with only two volumes left (at least so far), is Mardock Scramble. Kodansha Comics is releasing the third volume this week. It continues the story of Rune—a young prostitute who was given a second chance at life after attempted murder by a man she once trusted. Now a cyborg with the ability to control electronics, she’s working with the man who altereded her and a polite super machine in the shape of a large mouse. More chances for Rune to use her powers are a welcome sight in a series where the action sequences look this good and continue to perpetuate the story’s tense atmosphere.

If there’s one title you’re going to buy today, I personally hope it’s Fullmetal Alchemist (Vol. 27). This is the final volume of the shonen series, one of the best I’ve read in years. It’s also not every day you get to read the end of a shonen series either, is it? Fullmetal Alchemist’s ending brings the final dramatic fight to a close and ties up everyone’s personal stories in the aftermath. Some sacrifices will really surprise you and the finality of the story impresses just as much, including some fun epilogue drawings. It’s sad to see such a great series end but when it’s done this well, it’s hard to dwell on anything negative about it. 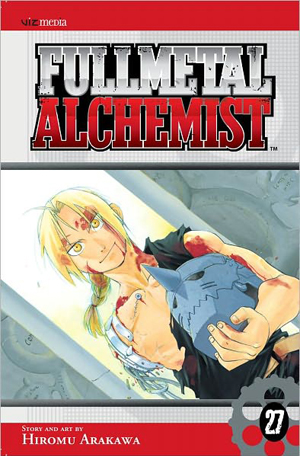 A lesser known title whose charms are a little harder to describe is Dorohedoro. In the fifth volume of the dark series—one so weird you could describe it as wacky and disturbing combined—Caiman is seeking out Risu, a man he hopes will be the key to his past and his original head (a giant reptile head still not on his list of things to accept). Meanwhile, the Sorcerers are preparing for a festival to find their own partners. Could it be the key to Caiman’s past and future or just another buffet of heads to eat? If curious, you can currently read chapters of the story up at Viz Media’s SigIkki.com website.

Yen Press dishes out value for your dollar and a heaping dose of almost-BL in the second omnibus volume of Betrayal Knows My Name. Yuki is still working to adjust to being found by his family, having thought for years he had no family out there at all. Finding himself now amidst a group who are all souls reincarnated for the purpose 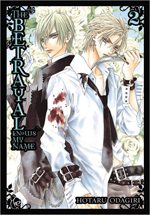 of battling a demon, however, is even more difficult. Clans, groups and the public collide as the Sleeping Beauty syndrome continues to threaten the city around them.