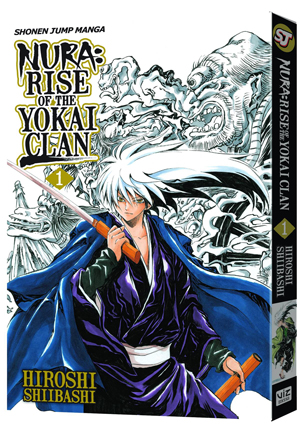 Rikuo Nura has a very special grandfather. His grandfather is Nurarihyon, the Lord of Pandemonium, the supreme commander of yokai. That ought to sound good on a résumé.

Rikuo is only one-fourth yokai. At the beginning of this volume, he’s ready to brag to his schoolmates that his grandfather is the supreme commander. He thinks this is something to be proud of. (You should see his classmates’ faces.)  He’s astounded to learn in school that yokai are feared, hated and, perhaps worst of all, believed to not even exist. His whole world is turned upside down.

Shortly after this, his grandfather decides to name an heir. Of course he chooses Rikuo, but not all the yokai like this. They might hate the idea of someone three-fourths human being their leader, or they might want the title for themselves. Whatever the reason, this makes Rikuo’s life a lot more dangerous. Which is really ironic, because he doesn’t even want to be yokai anymore. He wants to be human.

Some years pass and Rikuo continues to shed his yokai-ness, except in dire situations, where the spirit of the demon overtakes him whether he wants it to or not. And then a girl transfers to his school who is also an exorcist and doesn’t treat yokai very kindly…

I like mythology in stories, so all this stuff about yokai is fun. However, I would like it more if it delved further into the mythology and history of the yokai. Mostly these demons are shown to be weird-looking, not scary, though their job is to frighten humans. The creepiest image, I thought, was of a doll with bleeding eyes. (And, yes, it turned out to be a yokai.)

There are a number of aspects of Nura: Rise of the Yokai Clan that felt similar to other series. For instance, the way the yokai-spirit overtakes Rikuo. Other series might not have yokai spirits overtaking characters, but they might have something similar, like the nine-tailed fox in Naruto. Nura: Rise of the Yokai Clan has some original aspects too, definitely, but I think it might want to build itself up more and develop its own unique voice. I can’t tell yet if it’s going to do that. The fact that Rikuo is trying to escape his identity—but keeps being forced back into it—is a useful gimmick. There’s a major cliffhanger at the end, making you wonder what will happen next.