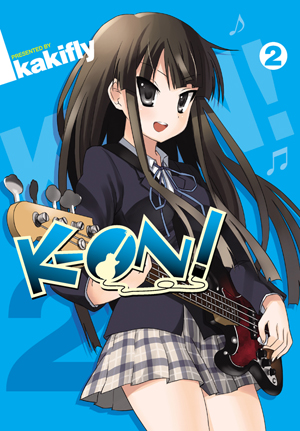 Despite this, Azusa wants to join the pop music club. She actually thinks they’re “really advanced and hardcore.” I don’t know what recording she was listening to. But she’s more or less a lifesaver for the club; the other girls were dressing up in giant animal costumes and passing out flyers in a vain attempt to get more members. No one else wants to join a group that has the songs like “Fluff-Fluff Time,” “Rice After Curry,” “My Love Is a Stapler” and “Brush Pen, ~Ballpoint Pen~.” Can’t imagine why.

Azusa meets with the club and says she plays the guitar, same as Yui. Still, she apologetically lets them know she’s only a beginner and not very good. Yui assures the girl she’ll teach her everything she knows. So Azusa starts playing and… she’s already better than Yui.

Devastation time. Yui may sleep next to her guitar and lovingly dress it up, but she’s not good at playing it.

Azusa joins the group, but the laziness of the other girls often frustrates her. She wants to get things done, not have tea parties. Even the teacher is too lazy. The only thing the teacher seems really interested in is getting her girls into absurd costumes that scream of moe. Are they ever going to make this work, or is it just more fun watching it not work?

The second volume of K-ON! is pretty similar to the first.  The girls (and teacher) are still often clueless, especially about their talents. It veers toward the random, and this is frequently used for humor. The story returns in the form of boxed panels, usually in rows of four. Sometimes this differs, but not often. There are a few colored pages, though most of it is in black and white, and there are a few additional comics at the end, including one of the characters reacting to the fact that an anime is going to be made about them.

Since the style is the same, I have a feeling fans’ reaction will be, too.  If you didn’t get into the first volume of K-ON!, odds are it’s just not for you. However, if you did like it (and I know there’s a fanbase out there) I think it’s safe to say you’ll like this volume as well.