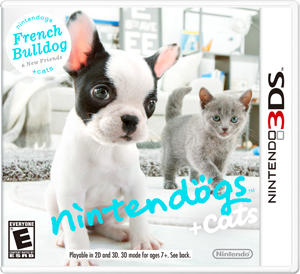 Perhaps you’ve had a long day at work. Perhaps your landlord does not permit pets. Perhaps your parents never bought you that Tamagotchi you wanted when you were 10. For the sake of argument, let’s say you also missed out on the first round of Nintendogs. This is no problem: considering the 3DS version’s upgraded everything, + Cats, you’re sure to get most everything you want out of this pet sim.

My spunky Shiba Inu (Japanophiles take note: you can start with this breed among six others if you pick up the Golden Retriever version, although if you do enough wireless Street Pass-ing of data, it seems you can unlock more) arrived jittery from the kennel and needed to be pet into comfort with her new surroundings, never mind the slightly awkward build-up of panting noises. Besides rubbing and poking the touch screen, the main way to interact with a puppy is the 3DS’s microphone, like in the DS version. This keeps the game squarely in the category of those you would rather not take on a bus, but tail wagging when you get home is standard, anyhow.

Naming your dog is one thing (although it’s a little precarious to vocally teach something like “Butterscotch” since you’ll have to come up with a goofy shorthand like “B-scotch” to fit in the text box), but training up the max three tricks per day is another. Once you manage to perform the sequence of treat waving or hand gestures via the touch screen, you’ll be prompted with a microphone icon to speak. I didn’t have much trouble being picked up, but it would be more useful to have a recording of what you said than to take a note with the stylus after speaking; more times than not I would hit a different pitch later on and end up with “beg” instead of “bang.” Yeah, creating your own commands is a fun curse; maybe “play dead” would have been easier to parse.

After memorizing the tricks, it’s time to throw down in a competition. The Obedience Trial makes use of the standard issue AR cards that come packed in with your 3DS, allowing your dog to Augment your Reality by projecting into the image of your room/lap/wherever-the-card-is-lying via the system’s camera. If you’ve experimented with the AR cards, you’ll remember how finicky the camera could sometimes be about detecting them, and it’s a shame that you actually cannot compete in this event unless you remembered to bring your cards with you, but in the end it’s pretty cute, if a little bit tech-demo. To tell the truth though, more than tricks, and more than the Disc competition with bonuses for mid-air frisbee catches, I got addicted to Lure Coursing. 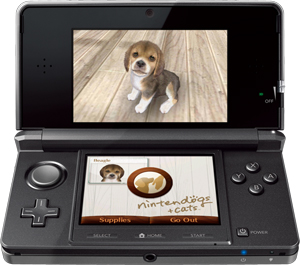 Lure Coursing replaces the Agility Trial from the original. Instead of dragging the stylus around to guide your dog through an obstacle course, you get to reel in bait with a sort of hypnotic circle-drawing motion. However, if you lose your dogs attention by reeling too quickly, or reel so slowly your puppy pounces on the bait, your time suffers and you need to beep the horn to startle your pup back on track. Balancing out to a nicely paced run is pretty satisfying; I definitely wish you could enter each competition more than twice a day.

That said, you can practice Lure Coursing (and fetching discs) while you’re out on a walk, unless you’re feeling like you yourself would like some exercise as well, in which case it’s better to boot up the pedometer mode and take a stroll. If you do play the walk instead of walk it, the main point is obviously, well, peeing (and don’t you dare think about leaving that weird little round poo on the ground). You can also occasionally run across neighbors with their dogs, presents, and a shop with rare items like wind-up toys.

Shopping with the cash you earn as competition prizes is probably the least compelling part of the game. (Wait though, I’ll take that back in a minute). The Sims 3 is already out on 3DS if you are a fiend for customization; better to focus on taking care of your puppy with proper food, brushes, and maybe a couple toys.

Now for the real least compelling part of the game: 3D. Maybe for a few minutes the animals “seem to leap out of the screen!” but when I wanted to spend some quality time with my pup (or Tobi, my new cat, who is fun to enthrall with the feather toy, but currently spends most of her time hissing at the dog), I found it was better to give my eyes a break and not bother with the funky visuals.

Where I am going with this is not that the 3DS version isn’t an improvement over the original, but what bumps it up a level is the sharper graphics, fun Lure Coursing, and kittens (even if they can’t learn tricks), not the forced AR card gimmick or eye-popping 3D. 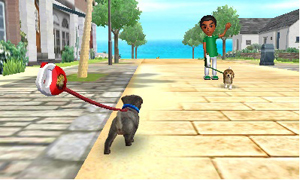 If the basic premise of befriending and training cuteness is not appealing enough to spend 40 dollars, the bells and whistles are not likely to change that. On the other hand, if you have fond 2005 memories of Nintendogs, then Nintendogs + Cats should bring back those fuzzy feelings in a hurry.

Nura: Rise of the Yokai Clan vol. 1
Get Hyped with the Latest Persona 4 Anime Promo