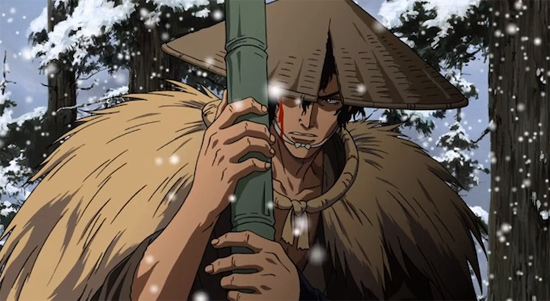 Once upon a time, there was a store called Blockbuster Video. In order to view filmed entertainments at home, customers would travel to their nearest Blockbuster, often several miles away, and rent a film contained on a physical media format – often a shiny metallic “digital video disc,” or a rectangular piece of plastic known as the Video Home System.

Though trying to remember those days is akin to starting through a thick mist, we vaguely recall one particular plastic video vessel labeled “Ninja Scroll” being, much to our teenage dismay, continually rented out.

That brings us to today’s topic of news: Studio Madhouse, the creators of the original Ninja Scroll (and its less popular TV incarnation), and original director Yoshiaki Kawajiri are hard at work on a sequel.

The details are a little murky, but basically, back in 2012 Madhouse announced a series of short films called Ninja Scroll BURST and released a one-and-a-half minute trailer. Now, in addition to BURST (which is scheduled to premiere at Madhouse’s new shop – look for a hands on report later this month), Kawajiri is working on a full-length film tentatively titled Ninja Scroll KOCHO. And KOCHO will apparently somehow incorporate BURST.

This whole thing is really giving my shift key a workout.

Anyway, Kawajiri has completed the script and storyboard for KOCHO, and is now in the key animation stage, though the financing for the film is not yet locked down. Which brings us back to those Blockbuster days of olde: apparently though Ninja Scroll was a big hit in the States, it didn’t really make waves in Japan, making money an issue.