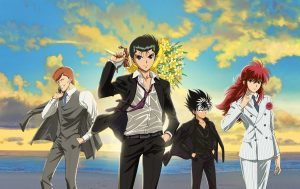 A new original animation project was previously announced for Yoshihiro Togashi’s Yu Yu Hakusho series, and now more details have arrived along with the latest issue of Weekly Shonen Jump. The new anime will adapt Yu Yu Hakusho volume 7’s “Two Shot” bonus chapter and the penultimate “All or Nothing” chapter when it launches in Japan this October.

Director and storyboarder Noriyuki Abe (Bleach, Flame of Recca) returns along with other staff members at anime studio Pierrot. The cast will also be reprising their respective roles, including Nozomu Sasaki as Yusuke Urameshi, Shigeru Chiba as Kazuma Kuwabara, Megumi Ogata as Kurama, and Nobuyuki Hiyama as Hiei. As for the stories of each adaptation, “Two Shot” covers Kurama and Hiei’s first meeting, while “All or Nothing” has the leads coming back together to resolve a spirit world hostage crisis.

The new Yu Yu Hakusho anime will be packed with the fourth part of the 25th Anniversary Blu-ray box set, which launches in Japan on October 26.