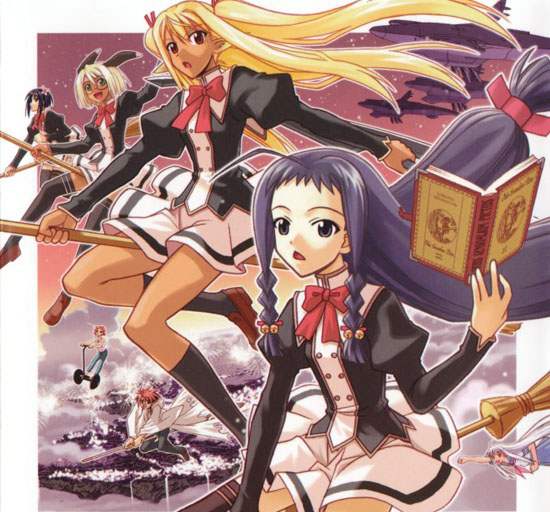 I’m going to be honest with you guys. I’ve never really read Love Hina. Or Negima! Haven’t seen the anime adaptations, either, despite hearing about both from friends and the internet in general for about 15-odd years, now.

What I do know is that both series were penned by the acclaimed and very popular/wealthy creator Ken Akamatsu, mostly thanks to an interview from a few years ago where he argues the manga industry is facing imminent collapse and everyone inside needs to evacuate the premises. He’s also the guy responsible for J-Comi, a web site that allows users to download digital version of out-of-print manga titles, completely DRM-free.

Anyway, the goods: Negima! ended last March, and details concerning was teased not too long ago, and now we have a name and story details. 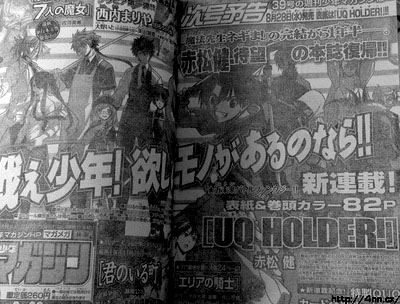 The name is UQ Holder!, and it’ll be running in Kodansha’s Weekly Shonen Magazine — the very same anthology that ran Negima for the past decade or so. It takes place in a world where magic is commonplace, and our hero, a magic-user in training named Tota, finds his life flipped upside down as he’s forced on an adventure which… if this all sounds a little lacking details, that might be because they want you to read the 82-page kickoff chapter in Weekly Shonen Magazine next week. What has the Japanese blogs in a minor tizzy is the relatively low number of female characters, at least in comparison to the casts of Love Hina and Negima.

Is Akamatsu losing his touch? Or will he score a hat-trick of manga hits with UQ? Only time will tell.