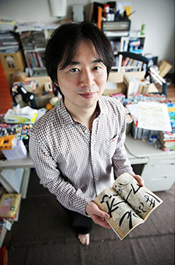 The Japanese government’s Agency for Cultural Affairs announced Thursday the winners of 2014’s Minister of Education, Culture, Sports, Science and Technology Recommendation Awards, and the Rookie of the Year for media/arts went to none other than Masashi Kishimoto, creator of the recently-completed manga Naruto.

In the press release, Kishimoto was praised for Naruto’s unique combination of shonen manga tropes and East Asian folklore.

On, Japanese social media, reaction to a manga that ran for 15 years winning Rookie of the Year was a collective “congrats, but… huh?”

For those curious, the grand prize for media/arts went to artist Shiro Takatani. The complete list of winners from all categories is here (Japanese PDF).

View all posts by Matt Schley
DBZ: Resurrection ‘F’ to hit the U.S. First
Akira meets The Simpsons, for charity