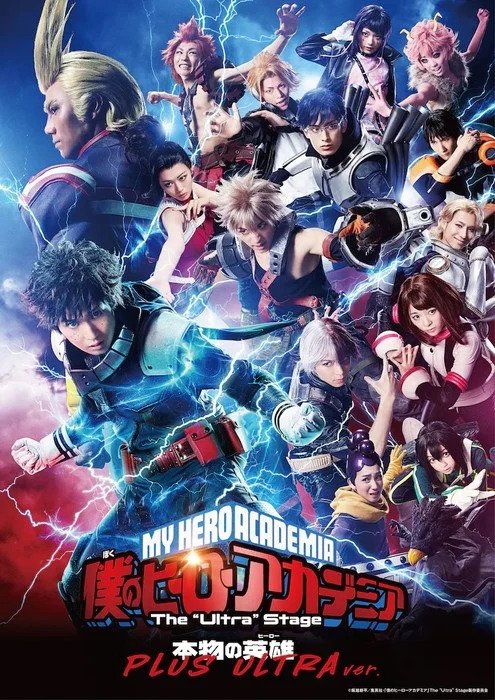 COVID has really thrown off some planned stage plays for My Hero Academia, but it was just announced that MHA will receive a new stage play next spring. And while that’s still a ways off, a visual has already been released to give us a teaser for it.

The My Hero Academia: The “Ultra” Stage: Honmono no Hero PLUS ULTRA ver. stage play will premiere in Tokyo this December. First people will be able to catch it at the Tokyo Dome City Hall on December 3-12. After that, it will be at Tokyo Gekijō for a much shorter run, only December 24-26.

It’s being directed by Tsuneyasu Motoyoshi, written by Hideyuki Nishimori, with music composed by Shunsuke Wada and choreography done by Takuya Shiono (Umebō).

This play was supposed to initially run in July of last year. When two people involved tested positive for COVID-19, the play was called off for the time being.

Then there was the issue of My Hero Academia: The “Ultra” Stage: Honmono no Hero (translated as A True Hero). It was also supposed to be put on last year, and while a few performances went through, the majority of them were called off because of COVID.

My Hero Academia: The “Ultra” Stage: Honmono no Hero PLUS ULTRA ver. has been referred to as the “complete version.” In it we’ll be able to see villains Dabi, Himiko Toga, and Twice, and they’ll all be stronger than ever.

The manga’s very first stage play, My Hero Academia: The “Ultra” Stage, ran in pre-COVID days back in 2019 and went without a hitch.

The original manga series made its debut in 2014, and is published in America by VIZ Media. VIZ gave this short description of the bestselling series: “Midoriya inherits the superpower of the world’s greatest hero, but greatness won’t come easy.”