My Girlfriend’s a Geek vol. 3 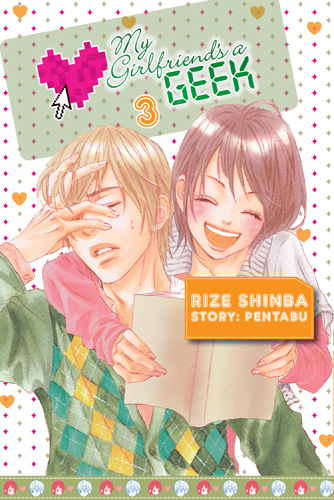 Taiga loves his girlfriend, Yuiko. He’s also terrified of her. She won’t abuse him or hurt him physically, but she will drag him down into her twisted geek culture, and it’s a lot of fun to watch.

This volume starts with Taiga when he gets a text message from Yuiko saying she’s gotten a younger girlfriend. She’s very proud and thinks her new girlfriend is adorable. This confuses Taiga, because, after all, she’s going out with him. Yuiko’s not dumping him or anything; she just wants to have a girlfriend in theory. It’s the geekdom talking.

But don’t think she’s not interested in men anymore. She still loves her BL stuff. Taiga gets a gig tutoring a very cute and blond eighth grade boy and he’s scared to tell Yuiko because he can imagine her glee and how quickly her mind will go to “seme” and “uke.” He’s just tutoring the kid, really. He begs other people not to tell Yuiko about his tutoring job and doesn’t want to answer his phone when she calls him during his work hours, even though this will probably worry her and make things worse.

Christmas is coming, and that gets Yuiko going as well. She likes the idea of dressing up as Santa, only in a little red miniskirt. She also likes the idea of dressing up as a pink nurse (to Taiga’s mortification, she’s figured out he likes pink nurses). But this isn’t just any pink nurse—she adds a tail and cat ears.   And her idea for his Christmas cosplay is… well, you just have to see it to believe it. I don’t want to give it away and a picture’s worth a thousand words, anyway.

My Girlfriend’s a Geek is a pretty fun series. It’s also a pretty simple one, going off with jokes at how absurd Yuiko can be. I think many geeks will see aspects of themselves in Yuiko, though probably not the whole package. Some of her stuff is meant to be way out there and you can see why Taiga can get so exasperated with her.

As a bonus, after the story is a mini comic of Sepatte Takuro, the sports manga Yuiko loves so dearly. So it’s a manga within a manga. It’s not as entertaining as My Girlfriend’s a Geek itself, but it’s cute that they thought to add it in so we can see the characters Yuiko adores.