My Girlfriend’s a Geek vol. 2 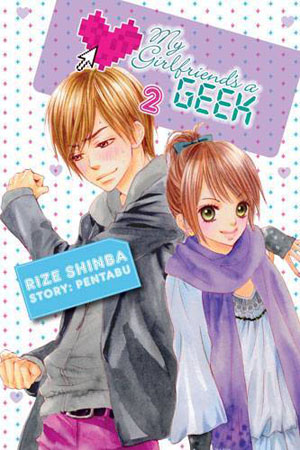 There are different kinds of geeks. There are computer geeks, science geeks, book geeks (that’s me), and then there are full-out fujoshi otaku geeks.  That’s how Yuiko could be described.

Taiga is a college student and has fallen in love with Yuiko, only for her geekiness to now continually irk him. He still really cares about her, but she is pretty over the top. She shows up at his apartment to play marriage simulation games on his computer, she tries to set him up with other men even though he isn’t gay and he’s already dating her, and she’s having him write a BL novel for her amusement. All this and more is getting to be a little much for Taiga.

The truth is, I think otaku (or people who know about otaku-ness) will enjoy and appreciate this series more than other people. A lot of it is so specific to geekiness over things like manga and BL that other people might not get it so much. In that sense, this is a niche read. Other people can enjoy it too, certainly, but it’ll be special to otaku. Yes, it makes fun of otaku, yet it does it in a playful way. You might laugh when you recognize Yuiko doing the things you might do.

The shtick throughout the book is how absurd Yuiko can get and how much Taiga is willing to put up with it. (More than one scene lets us hear Taiga’s agonized thoughts as he tries to handle the latest situation.) At one point she takes him to Otome Road and leaves him alone outside a building while she freaks out over all the thrilling merchandise. Then she drags him along with some of her female friends to a school uniform café where the girls dish about doujinshi with animals and flowers. Taiga thinks to himself, “I sense danger! I am surrounded by these dark Jedi of the fujoshi world! Trapped!!” Because how can he tell Yuiko that she’s scaring him without hurting her feelings?

Of course, Yuiko makes fun of Taiga for his interests. Instead of reading manga, he reads useless stuff like political science and literature. The bum.

Toward the end of the book, another man shows interest in Yuiko, though she’s oblivious to this fact. Taiga doesn’t like it so much. Sure, Yuiko can be annoying, but she’s still his girlfriend. Is Taiga going to stay with Yuiko and let her know she can be a little over the top sometimes, or is he going to be sucked into her geeky little world?

MangaGamer Has Higurashi, Other Titles at a Discount
New to Section23: Shin Koihime†Musō and More