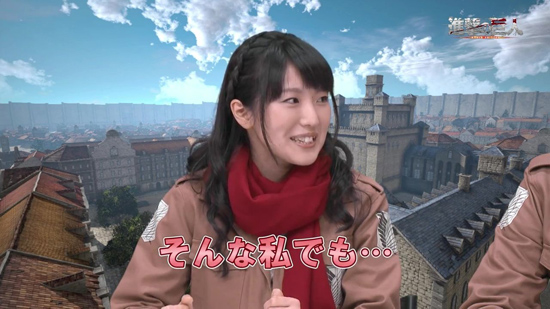 Koei Tecmo are getting set to release their new Attack on Titan video game next week, and to promote the game, they’ve released a video with none other than Mikasa’s voice actress Yui Ishikawa tacking a crack at it.

Ishikawa actually gets playing at about the 6:00 mark. Other highlights include 9:30, when Ishikawa takes pity on Armin, who looks pretty pooped in a cutscene, and 13:00, when she takes out her first Titan. Oh, and don’t miss 2:00, when Ishikawa eats a Titan-shaped cake to celebrate Mikasa’s birthday, February 10.

Ishikawa (whose natural voice is way different than Mikasa’s, whoa) is joined by game producer Hisashi Koinuma, and they’re both in Attack on Titan cosplay, natch.

The game (which looks pretty fun, actually) comes out February 18 in Japan on PS4, PS3 and Vita, and at some point this year in North America and Europe.

A pretty entertaining video – but I’m still partial to that one from a few years back of Harrison Ford playing Uncharted.