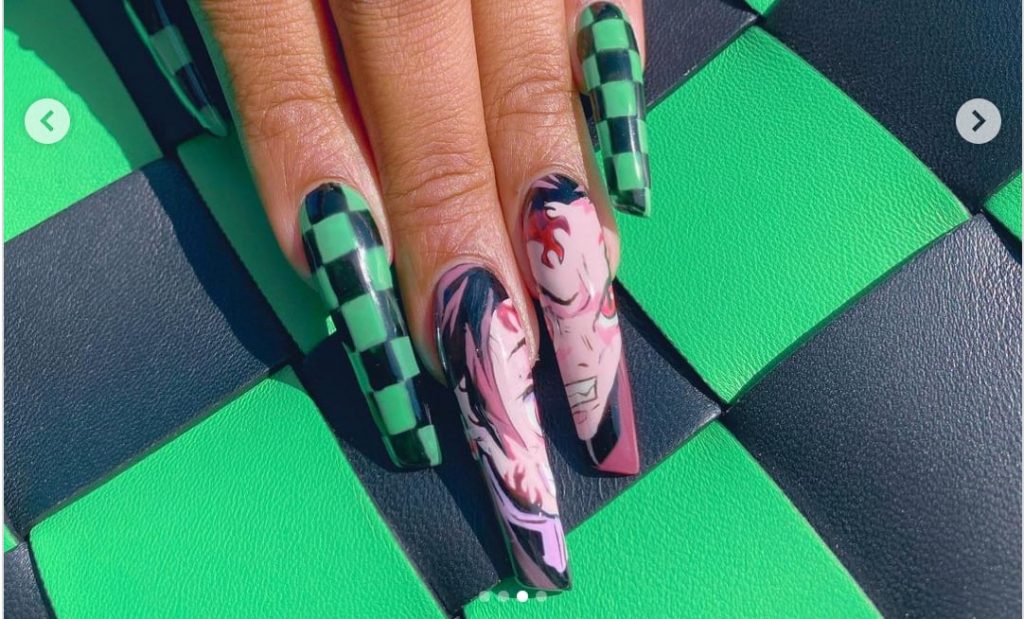 Her nails feature Tanjiro’s signature black-and-green checkered pattern, plus Tanjiro himself on the left and Nezuko on the right.

Megan Thee Stallion is probably one of the most high-profile anime fans out there these days. She’s given interviews in which she lists her favorite stuff, from My Hero Academia to Attack on Titan to Naruto to Bleach. She also teamed up with Crunchyroll for some limited-edition swag at one point.

In the world of anime manicures, she’s also had the characters of JoJo’s (specifically, Stardust Crusaders) done.

For all three of you who haven’t heard of Demon Slayer yet, here’s a description:

It is the Taisho Period in Japan. Tanjiro, a kindhearted boy who sells charcoal for a living, finds his family slaughtered by a demon. To make matters worse, his younger sister Nezuko, the sole survivor, has been transformed into a demon herself. Though devastated by this grim reality, Tanjiro resolves to become a demon slayer so that he can turn his sister back into a human, and kill the demon that massacred his family. A sorrowful tale of siblings in which the fates of humans and demons intertwine…begins now!

View all posts by Matt Schley
Exclusive Interview: Media Blasters CEO on Company’s Reemergence
Why Is That Kid from Stone Ocean Wearing a Cubs Uniform?