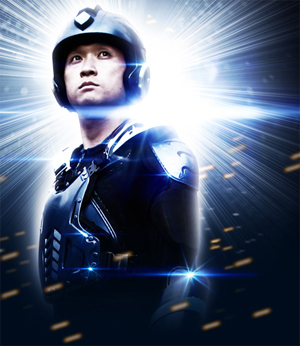 There’s a sort of gag reflex when one hears mention of a fan-film. Who can blame you? While there have been some diamonds in the rough, there have also been some utterly terrible productions. Those in themselves aren’t exactly the turn-off for me; that’s reserved for poor fan-films that have problems with plot/anything that isn’t technical and hide behind the shield of Low Budget as a fragile crutch. While that notion seems jaded, it’s more me being a firm believer that you can accomplish greatness on a shoestring budget if—to quote Black Dynamite—you really put your ankles in it. That’s why I tend to avoid them. That is, until Mega Man came along.

I’ve been a follower of ScrewAttack for quite some time; you might remember I went on great length about them in my write-up of the first year of their gaming convention—which I highly recommend you attend if you can. In the midst of their seemingly endless evolution, it came out that they would play host to a rather ambitious fan-produced adaptation of the adventures of everyone’s favorite Blue Bomber.  If they’d thrown their name behind it, I figured it must be worth any and all trouble, right? With that in mind, I fought past the gag reflex and gave it a shot. The final product? Though a bit bumpy, it blows pretty much anything that would or has even tried to come close out of the water.

Following the storyline of the first game (and taking liberties with elements from the rest of the series) this feature length production revolves around Dr. Wily’s attempt to rule the world using the newly-constructed Robot Masters from his rival, Dr. Light. Humanity’s only hope lies in Dr. Light’s greatest creation, Rock, who volunteers to fend off the Robot Masters and save the world as “Mega Man”.

Let me just say that from the first trailer, I was blown away at the effort that went into production value and special effects, and how this was a serious attempt to try and make the game work in an almost realistic setting. For an hour and twenty minutes, we’re privy to some great action scenes, tons of loving references to the franchise, and otherwise one heck of a ride. The cast is top notch here, really bringing an unexpected depth to these beloved characters. This is all backed by a rousing orchestral score that while original, didn’t waste a second in creating one of the best versions of the theme from Dr. Wily’s Mega Man 2 Stage that I’ve ever heard.

For a fan film, Mega Man has one of the strongest focuses on a serious plot I’ve seen. The focus on character is intriguing to say the least, with the family relationship of Rock, Roll, and Doctor Light really getting fleshed out. Unfortunately, this aspect is also something of a double-edged sword here. Though it doesn’t completely botch the experience, we’re given nearly too much story as there are several subplots: Dr. Light’s past, the appearance of Blues/Proto-Man and his backstory, Rock’s attempt to discover his purpose—there’s a lot going on, and it doesn’t help that it’s all revealed during a time in the film where the pacing starts to whittle down.

By that I mean that in its climax, instead of doing a full-on brawl, the final showdown with the Robot Masters emulates the game by going into “Stages”. It all goes down the same way: Introduce a Robot Master, Mega tells them that he doesn’t want to hurt them, One-Liner, fight, go back to base, exposition, go back out, fight two Robot Masters, exposition—you get the idea. This also hurts an attempt by the film to give the Robot Masters distinct personalities. (i.e Elecman feels he’s fighting for justice, Iceman has a split persona, etc.) It’s commendable and a really unique concept, but it’s also (sadly) wasted in light of the other major threads throughout the film. What happens is that it falls into the rut-embedded climax and makes you wonder if the effort was only for padding things out. If there is indeed a sequel in the future, above all else, I would love to see this aspect perfected.

Speaking of which, in its final moments, Mega Man does somewhat hint at the possibility of a sequel. Maybe I’m reading too much into it but regardless, I’d like to see it. Because for all the pacing issues, if you really are just looking for a video game movie made by people who give a damn about the source material, this is what you’ve been waiting for. Mega Man is still fun, slick, exciting, and stocked to the gills with references that will appease the inner fan in everyone. Until the day when Capcom (or let alone any video game company) just starts throwing money at talented fans to make quality films, Mega Man can take solace in the fact that it’s not only shown that you can be loyal to source material and entertaining, but that it pulled it off on a fraction of the budget of Legend of Chun-Li.