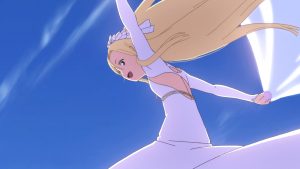 ELEVEN ARTS Anime Studio announced more plans for the English screenings of Mari Okada’s Maquia: When the Promised Flower Blooms anime film. In addition to the previously-revealed U.S. screenings, the film will make its debut at the same time in Canada on July 20.

The Canadian premiere will put Maquia in competition at the 2018 Fantasia Film Festival, which will be held from July 12 through August 1 in Montreal. The feature will be screened in the original Japanese with English subs.

A renowned screenwriter, Maquia marks the directorial debut for Okada, diving into the dilemmas of motherhood, adolescence, femininity, and leadership. Okada wraps all these poignant themes into a sweeping epic with well-developed characters, emotional gravitas, stunning visuals, and an exhilarating score by composer Kenji Kawai (Ghost in the Shell). The film premieres in Canada as an official competitor at the 2018 Fantasia Film Festival.