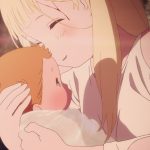 Acclaimed anime screenwriter Mari Okada (Anohana: The Flower We Saw That Day, Anthem of the Heart) makes her directorial debut with Maquia: When the Promised Flower Blooms. We’ll get a chance to check it out in North America soon, because ELEVEN ARTS Anime Studio announced plans to bring it over for theatrical screenings.

The next theatrical release for the film is currently set for July 20, and you can check the official site for theater locations and more details.

Maquia is the directorial debut of renowned screenwriter Mari Okada. The film dives into the dilemmas of motherhood, adolescence, femininity, and leadership . Okada wraps all these poignant themes into a sweeping epic with well-developed characters, emotional gravitas, stunning visuals, and an exhilarating score by composer Kenji Kawai (Ghost in the Shell ). The film, hot off its initial February release, quickly made its way across the globe to premiere at the Glasgow Film Festival , where it captivated audiences. Maquia: When the Promised Flower Blooms will carry the torch for films like Your Name and In This Corner of the World, infusing pure artistry and pathos into anime .